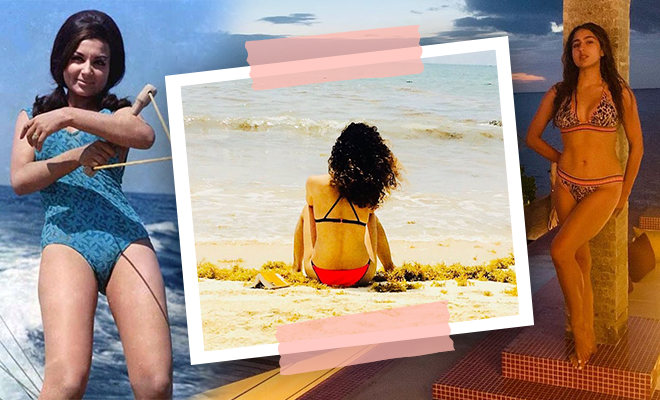 Bikini Clad Women Always Outrage Society. Why Do We Feel The Need To Police What Women Wear?

Women’s choice of clothing has always sparked unnecessary remarks and discussion. No matter how covered up or exposed we decide to keep ourselves with the clothes, the moral police will always find something to say about it. Plus, it’s not just some harmless observant comments. They would equate our character with the length of fabric on our body. This is not new and as it seems, it is not going to change. In a world where a woman dressed in saree offends the eyes if the pallu is slightly lower than how the ‘society expects it to be’, what could we possibly expect from some conservatives when they see the ever-so sanskari Indian woman in a bikini? I can hear hawws and gasps, already.

Somehow, it’s highly offensive for women to make their own choice when it comes to clothing and roam around in a two piece. I mean, how dare we become the rule breakers and shed some piece of clothing? What seems so scandalous for no apparent reason, bikinis are quite liberating and stylish, not to mention the only appropriate dress code for beaches. However, women wear the swimsuit often invites objectification, judgement and constant criticism. Not the first time, but it recently happened yet again with Kangana Ranaut when she shared a throwback photo of herself on the beach from when she was holidaying in Mexico in which she is wearing a bikini.

From hurling abuses to questioning her character and religion, the so-called online moral police didn’t leave any stone unturned to call her out for something that’s not even hurtful or offensive. However, they probably forgot she is the last person you mess with on Twitter, unless you are Diljit Dosanjh. She clapped back saying, “A few people, after looking at my bikini picture, have been lecturing me about religion and life. What if Goddess herself comes at you with her hair loose, unclothed to drink your blood? You will be petrified leaving you colourless. And you call yourself a devotee? Walk on the path of religion but don’t try to preach and pretend to be it’s authority… Jai Shri Ram. (sic)”

Well, Kangana sure isn’t the first one who has hurt the patriarchal sentiments of the society in a two-piece. Before this a number of (almost all) celebrities have fallen victim to public intolerance and hate for wearing a bikini. Sharmila Tagore the OG who was the first actress to wear a bikini onscreen for her movie Evening In Paris and later for a fashion magazine created a quite a stir with her swimwear back in the 60s. That was the first time the bikini bomb was dropped on the Indian audience and consequently there were some nasty talks. This was when the social media didn’t exist so there was no online hate but it become hot topic for discussion in the Parliament and the song was clipped out from Doordashan screening. Probably they were concerned about the kind of influence it would unleash upon the younger generation of women and feared if one day they would find liberation in their choice of clothes. Oh, well!

However, some traditionalists didn’t evolve with time and a bikini is still the most controversial piece of clothing that is capable of offending a whole lot of regressive thinkers at once. Three generations later, Tagore’s granddaughter Sara Ali Khan was also slammed for wearing a bikini and sharing the frame with her brother. Netizens called her shameless for posing in the skimpy outfit with her brother which is plain ridiculous. They targeted her on the basis of religion again (because that’s the most preferred angle to make a point out of anything absurd) and told her to give up her religion because she didn’t respect it, according to them.

Other than the Pataudi women, a lot of other actresses have also been criticised for being the rule-breakers and wore what they wanted to on the beach. Taapsee Pannu, Hina Khan, Disha Patni and Radhika Apte are some of the many who were mercilessly trolled for wearing the bikini. I would say rarely anyone who dared to wear the ‘two-pieces only’ was spared of the wrath of trolls. This unending trend of controlling a woman’s clothes and calling her out and worse, slut-shaming her when she doesn’t give in to your oppression is highly toxic. When a male celebrity roaming on the beach in his boxers doesn’t evoke hate, why a woman in bikini stings the eyes of people and spark debate? We should be able to wear whatever we want and if that hurts someone’s eyes, well, then it’s their problem.

Also Read: Malaika Arora Was Slut-Shamed For Wearing A Swimsuit, But She Has A Valid Question For Her Trolls!