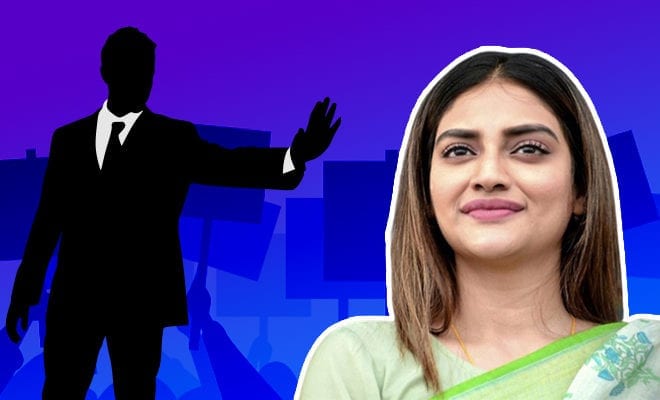 “Why Was EC Sleeping All This Time?”, Says Nusrat Jahan On The Restrictions Put On Poll Campaigning

The economy is dwindling, people are dying and life-saving resources like oxygen are getting harder to find with every passing second. One would think that the prime concern of any government at the moment would be to contain the crisis and minimize the damage. However, things were not so obvious in the state of West Bengal where, until recently, rallies were rampant and social distancing was a joke. And while the social media uproar fell on deaf ears, it is now that public meetings have finally been banned by the poll body.

A decision that was taken a tad bit too late, as pointed out by Trinamool Congress MP Nusrat Jahan as she questioned the delay and asked why the Election Commission had been sleeping all this while.

After casting her vote with her parents in the seventh phase of the polls on Monday, Nusrat Jahan spoke about the campaigning in West Bengal and said how whenever she has campaigned, she only saw support for Chief Minister Mamata Banerjee. She said, “Wherever I have been campaigning, I’ve seen peoples’ support for only one face – Chief Minister Mamata Banerjee’s… Why was the Election Commission sleeping all this while?”

Wherever I have been campaigning, I have seen people's support for only one face-our Chief Minister: TMC MP Nusrat Jahan Ruhi to ANI

Also Read : Nusrat Jahan Seeks Legal Action Against A Dating App That Used Her Picture Without Consent. How Hard Is It To Understand The Concept Of Consent?

Honourable High Court could have been more candid in pointing a finger at Hitle @narendramodi
"Too Late": Trinamool's Nusrat Jahan On Restrictions On Poll Campaigning – NDTV https://t.co/4O310jPApO

At present, West Bengal is heaving under 88 thousand active cases of Coronavirus whereas 10,941 people have been recorded to have lost their lives to it already. And yet, the voting in almost 34 constituencies across five districts of the state continue. Further to this, polling for the final phase will be held on April 29 while the counting of votes will take place on May 2.

Also Read : Nusrat Jahan Issued A Fatwa For Wearing A Saree. Can We Just Let These Women Wear What They Want?