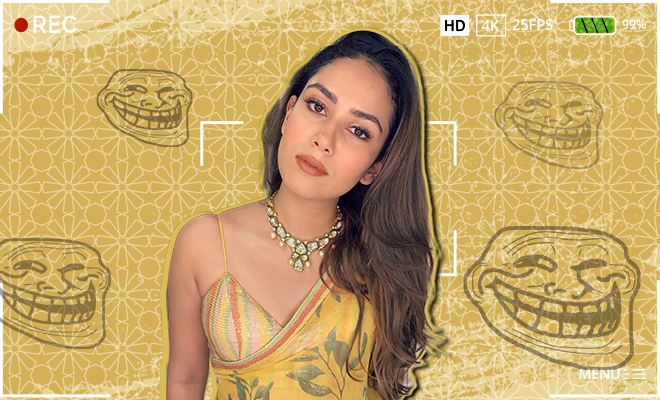 What Has Mira Rajput Done To Be On The Cover Of A Magazine? Been A Supportive Wife. It’s Not Nepotism, So Calm Down

If the story of Cinderella had unfolded today, she would have been heavily trolled for getting a handsome prince, without having to go through 3000 profiles on Tinder and without being ghosted a few times. The Sleeping Beauty (technically a story of a perv and non-consensual kissing but never mind) would be even more trolled because at least Cindrella took some effort to go out there. This one just woke up to an amazing love life. Why can’t we just be happy about the good things happening to someone? So when Mira Rajput and Shahid Kapoor featured on the cover of Vogue Wedding Book, netizens spewed venom at Mira, and deemed her unworthy of it. So, for those who aren’t able to recollect, Mira Rajput had said on Koffee with Karan, that she doesn’t support nepotism. And now trolls woke up and got butt hurt about the fact that she is on the cover of Vogue “because she is Shahid’s wife”.

A user wrote: “I thought you were not fond of Bollywood, such a nice way of having double standards.” Someone also said, “Married a celeb and gave birth to two of his children, easiest way to reach Vogue Wedding Book.” Dear woman pulling down another woman, don’t take away from mothers and wives, just because they are not working professionals. I am sure, you consider your mom an equal contributor to your dad’s success. If not, I feel sorry for them. Also, if tomorrow you wake up married to Vicky Kaushal and are getting to be on the cover of Vogue, would you refuse? Frankly, this is just a situation of sour grapes and reeks of jealousy. Mira deserves all the good things coming her way.

One user went ahead and reduced Mira’s contribution to zero, “when you contributed nothing in group assignment and still end up getting an ‘A’.” I don’t understand, how can you measure the worth of a person, based on their professional accomplishments? Are you saying, all those homemakers are worthless? Honestly, I feel that your partner contributes majorly to your career, in ways nobody outside of your relationship can understand. Having a supportive partner makes you feel stable and at peace, which trust me, makes a huge difference to your productivity.

Mira has stood by Shahid, supporting him and making it easier for him to focus on work. It’s not easy being a star wife and bitter people who think it’s all glam and fun are clearly not in the realm of reality. Signing up for this role is a huge responsibility, because you will be under public scrutiny and unlike your celebrity partner, you’re not used to this. You will have to be strong enough to not let the on-screen romances get to you. If Mira had put her foot down and said I can’t deal with your Kabir Singh romance, would Shahid have the biggest hit of his life? So if you ask me, what Mira Rajput has done to be on the cover  – then let me tell you, that she has contributed to making what Shahid is today.

ALSO READ: Shahid Kapoor And Mira Rajput Got Real About Being In An Arranged Marriage – The Good, The Bad And The Ugly

Also, all these rants about her being on the cover are coming from people who either lack observational skills or rationale, because they are on the cover of The Vogue Wedding Book. I mean, it only seems obvious to me that Shahid would be on it with his wife. If he wasn’t with Mira, that would be super odd, right? So calm the fuck down people.