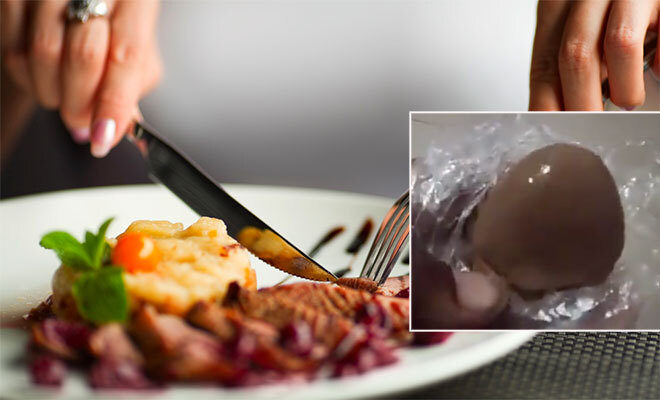 Woman In Ghana Finds Human Penis In Food. We Have So Many Questions!

The best and worst part of the internet is that it never misses a chance to amaze us with some extraordinary acts. While some cases melt our hearts, others make us question our whole life. Recently, one such case came to light where a woman in Ghana found a human penis in her food. I don’t even know what else to say?

The woman shared the shocking video on Instagram. In the video, the woman is showing an object which looks like a penis. She found the object in a dish called Tuo Zaafi, which is a staple food available in Ghana. Tuo Zaafi is made with grains and meat, the food is easily available in street food stalls. The woman bought the packet of food from a street food vendor but was shocked after discovering the human penis-like object.

Sharing the video on the internet, the woman requested people to carefully check the food items bought from street stalls before consuming them. Check? I feel like I will not buy any food item from anywhere, even though I don’t live in Ghana! A lot of people commented and asked the woman to report the incident to the police. I mean, they are absolutely correct!

But wait, there’s more to the interesting and disturbing information. This is not the first time that such a disgusting discovery has been made from a packet of food in Ghana. According to the reports, a woman named Akousa found a penis-like piece of meat in her food too. The incident took place in Accra, Ghana, in the year 2016. She even contacted the police to do a DNA test on the piece of meat. Okay!

Also Read: Man From Bangkok Puts Ring Around His Penis To Enlarge It, Ends Up In Hospital

The woman should report the case to the police to find the culprit. Who knows? The person might be a psycho killer or it can be a stupid prankster who thinks such disgusting acts are funny when it is not.