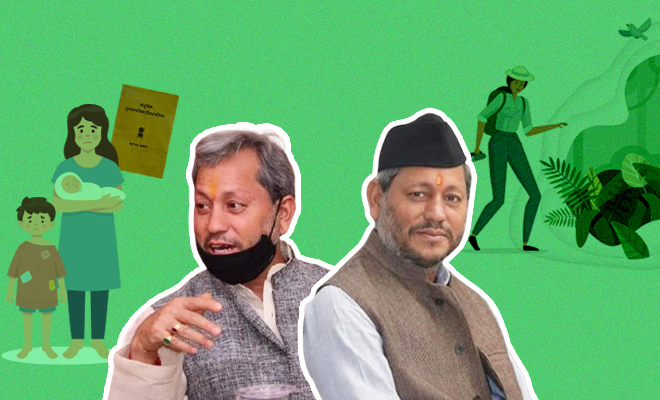 It seems like for reasons both bad and good, the Chief Minister of Uttarakhand has made it a point to stay in the news. First he talked about ripped jeans being offensive to his sensibilities which started of a #RippedJeansTwitter trend. His wife came to his defense saying ‘women need to protect culture’ so at this point it seems like the whole of Tirath Singh Rawat’s family is thoroughly marinating in misogyny.

During a programme held to mark the World Forestry Day in Nainital’s Ramnagar, Tirath Singh Rawat announced his interest in pushing women towards a more active and engaging role in the Corbett Tiger Reserve, as he spoke about his intent to have 50 vehicles registered under next tourism season, for women.

He took to twitter and wrote, “Today, on the occasion of World Forestry Day, I participated in the program organized in Nainital’s Ramnagar, district. For the first time in India in a tiger reserve, 50 women as nature guides and 50 women as gipsy drivers, will take tourists on the safari”.

If You Wanted More Ration, Should Have Given Birth to More Children: Tirath Singh Rawat https://t.co/4LZp9nWNMX

He further went on to share that a light and sound show will be also be started, generating more employment in the area. With a view to employ 5 thousand male and 5 thousand female youths as guides across the park. Meanwhile, the Forest Minister Dr Harak Singh Rawat said that under an initiative for women,  each woman “nature guide” will be earning Rs 25,000 per month now.

And while we were beginning to think that maybe the Uttarakhand CM had his senses kicked back into him, after the fiasco of the #rippedjeans, he again said something that made us question his mentality once more. Speaking at the same programme, this time about ration during coronavirus, Rawat said people should have produced more children to get extra ration.

Uttarakhand CM Tirath Singh Rawat said people with fewer family members had received less rations during the lockdown as compared to those who “reproduced 20”, creating “jealousy”, saying it was their fault for “not reproducing enough”.https://t.co/M9vWoeCLrW

“Those having 10 children got 50 kg while those with 20 got one quintal. People with two children got 10 kg. People built stores and found buyers. Who is to blame for this? Now you are jealous of it. When there was time, you produced only two. Why didn’t you produce 20,” said Tirath Singh Rawat with a logic as questionable as his statement.

Simply ignoring the problem of population explosion or the fact that women are not children making machines, that would give birth to 20 children just for ration. Guess, there is only so much damage control you can do before your true nature surfaces up again.

Also Read : Women Rip Misogyny A New One With #RippedJeansTwitter After Uttarakhand CM’s Remark. We Call That Sending A Message!