UP Man Disguised Himself As A Woman To Meet His Girlfriend On Her Wedding Day. It Didn’t Go Well 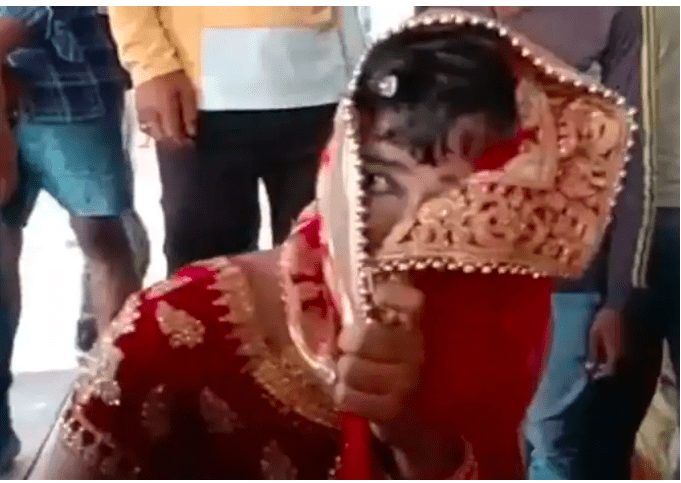 For a long time when I would watch a movie, and would see the hero trying to pull off sneaky and ridiculously dangerous stunts during the climax of the film  to either save/rescue or even confess their love, usually at a wedding or at the airport, I would be all, ‘meh, this is Bollywood fiction.’ Because the odds of what was happening in real life were as good as none. However, things have considerably changed now, for reality now seems to be deeply inspired by such movies.

We say this especially after coming across news of a man from  Uttar Pradesh’s Bhadohi showing up at his girlfriend’s house dressed as a woman to be able to meet her on her wedding day. Could this be anymore filmy?

Dressed in a red saree, with a wig on his head, make-up on his face, a ladies bag hanging on his shoulder and sandals in his feet along with a ghoongat to hide his identity, the guy sneaked into the house where wedding preparations were already going on. While he tried his best to get past the suspicion of people, seemingly his body language gave him away as people pulled his veil off.

The youth dressed himself in clothes of a #bride, used fake hair and applied #makeup all over his face to look like a #woman.#UttarPradesh #Bhadohi #ViralVideo #Wedding #Girlfriendhttps://t.co/ujcIAmBjqI

When the veil was pulled, his wig came off with it and his identity was revealed. And just like that in a movie, the family of the bride did not take it all too well. The lover of the bride was then also allegedly slapped during a confrontation with the family and as the matter seemed to be getting more intense, he fled with his two friends who were waiting outside the house on a bike.

Reports share that the plan was for the guy to enter the house in a woman’s disguise and meet his girlfriend before she could get married. However, his plan failed when he couldn’t reach the bride and got caught way before that itself. Talk about taking risks in love! And on the wedding day. The audacity.

Also Read : This Woman Was Ghosted By Her Boyfriend Of Two Years. When She Filed A Missing Person Report, She Was Told He Doesn’t Exist