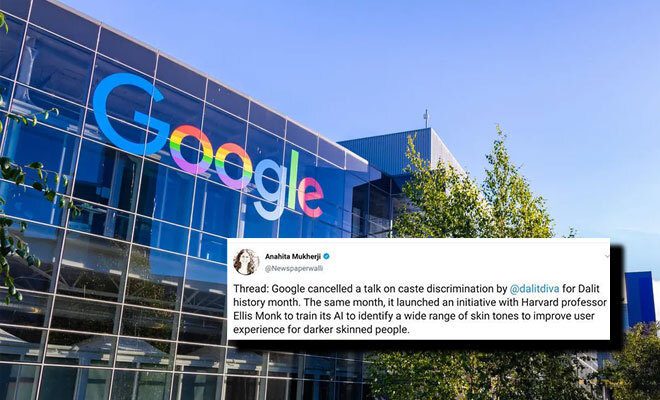 I do believe that social media is a really good platform to educate oneself and gain information about the happenings of the world. Yes, of course, it has its own cons. However, this time an informative post has raised questions about the hypocritical nature of a company. A Twitter user through her handle has highlighted that Google cancelled a talk by a Dalit woman during the Dalit history month but in the same month launched an initiative on skin tone. Yes, that does make no sense and there’s more to this.

A Twitter user by the name of Anahita Mukherji, a journalist,  has called out Google by highlighting some very valid points in her Twitter thread. She firstly mentions that the company cancelled a talk by a Dalit woman. However, in the same month, it launched an initiative with Harvard Professor Ellis Monk to train its AI to recognise a wide range of skin tones in order to improve the user experience for people with darker skin tones. The user further points out that people working at tech companies fail to realise that AI is yet to detect caste discrimination which is beyond the inequality of skin tones.

Thread: Google cancelled a talk on caste discrimination by @dalitdiva for Dalit history month. The same month, it launched an initiative with Harvard professor Ellis Monk to train its AI to identify a wide range of skin tones to improve user experience for darker skinned people.

Anahita further expresses the irony of the situation, where two Indians- CEO Sundar Pichai and Senior VP Prabhakar Raghavan launched the skin tone initiative during Dalit month but at the same time, their company cancelled a Dalit woman’s talk. Elaborating on the same she writes the reason for cancelling the talk. She says it happened because some employees of the organisation said that they were afraid of the talk on caste bias as it would be a threat to their lives. Countering this point Anahita raises some questions on whether the company would cancel a black speaker’s talk if it puts the white people’s life at risk.

It’s unlikely that tech companies headquartered in liberal California, would cancel a talk on racism by a Black speaker on grounds that white people would feel threatened by race.

Google’s adoption of the Monk scale was unveiled by its India-born senior VP Prabhakar Raghavan. Ironically he & CEO Sundar Pichai, both raised in India, launched an initiative on skin tones during Dalit History Month, while their Co. cancelled an internal talk by a Dalit woman.

The user openly criticises Silicon Valley’s ignorance towards caste discrimination. She finishes her thread by quoting some words of Dr B R Ambedkar who was the chief architect of the Indian Constitution.

The ease with which caste has been overlooked in Silicon Valley has much to do with America’s ignorance about South Asia’s caste system, one that is hierarchical in nature and divides society into four main castes within which there are countless sub castes.

Dr Ambedkar, chief architect of India’s constitution, called caste a system of graded inequality. He described Hindu society as a tower which had several storeys without a ladder or an entrance. One was to die in the storey in which one was born

Also Read: A Twitter User Receives Some Very Valid Backlash For His Twitter Thread On Why Women Shouldn’t Code

The thread definitely puts forth some valid counterpoints on the issue. The fact that such a big company like Google would take away the platform from marginalised classes is shameful. Caste discrimination is still a raging issue in India and the voices of the suffering groups should be made stronger. What is the point of working towards eliminating one kind of discrimination and absolutely ignoring the other? This is such a convenient approach to the problem and indeed should be called out!