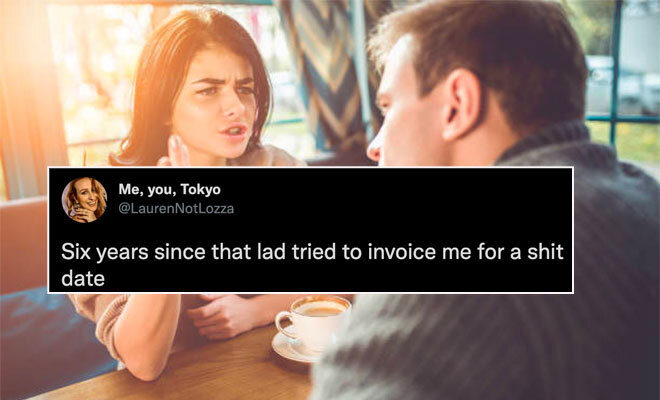 Man Asks Woman To Pay Back For The Coffee After The Date Went South, She Takes It To Twitter!

Truth be told, I’ve had my share of dates that did not go so well. I mean, most of the time it was no one’s fault but other times, well it was someone’s. I have to say, of all the dates I’ve gone to, it is the bad ones that I find the most amusing because somehow they end up being quite entertaining. And I don’t think this is just the case with me. In fact, there is a woman from London who would agree. Recently, a woman from London shared screenshots of a date she had gone to six years ago and how he asked her to pay back the money he spent on coffee when it did not go well. Now, she is sharing old screenshots that tell the story through the conversations that took place between them. Confused? Well, let me start from the beginning.

Once upon a time, six years ago, there was a woman named Lauren Sylvia from London, she went on a date with a man and when the date came to an end she realized that she was not really interested in the man and did not want to take things further.

Also Read: Women Reveal The Worst Dates That Ended In Them Walking The F*ck Out

Now, there is nothing interesting about the story so far but what happens next is definitely interesting. Six years ago, the woman shared a series of screenshots on Twitter that showed the conversation that took place between her and the man with whom she had gone on a date. In the screenshots, one could see the man asked Lauren to meet again but Lauren politely declined and said, “It was lovely to meet you but not sure we had that chemistry.”

Six years since that lad tried to invoice me for a shit date pic.twitter.com/n73IIG13By

The man persisted stating that he would cook for her and that she should give them a chance. And when Lauren didn’t agree, he tried convincing some more. But when nothing worked, he asked the woman to give him back the £3.50 he had paid for coffee on their date. He wrote, “Ok, fair enough. Can you pay me back for your coffee? I do not like wasting money. I prefer to use it on a date with some else.”

This is not even the most amusing part of it all, it gets even more amusing. Lauren who realized that she was in an unusual and unique situation decided to pay back the money but with a twist. She replied to the man with who she had gone on the date with saying she would donate not just £3.50 but rather £5 to a charity of his choice.

Also Read: This Obsessive Mother Lists Rules To Date Her Son. Why Do Moms Think Women Just Want To Rob Their Sons?

Lauren decided to let people know how exactly the conversation ended and shared the most unique end of it all. She shared the last screenshot of her conversation with a man she went on a date with six years ago and wrote, “Forgot to add his final response.” The last screenshot consisted of the man stating that he wanted to decide what he wanted to do with the money and shared his bank account details with her. Needless to say, netizens that came across the Tweet were hooked on the story (the same way you peeps are).

Well, like most date endings, this one also did not have a happy ending. But it sure had one epic, unique ending that frankly has amused me quite a bit. Thinking about it, I often wonder what I’d have done in that situation. Well, who knows – either time will tell or we’ll never know.