Twinkle Khanna Gets Flak For Trying To Be Witty By Riding On The Sadguru Tweet. Hima Das Deserves Better 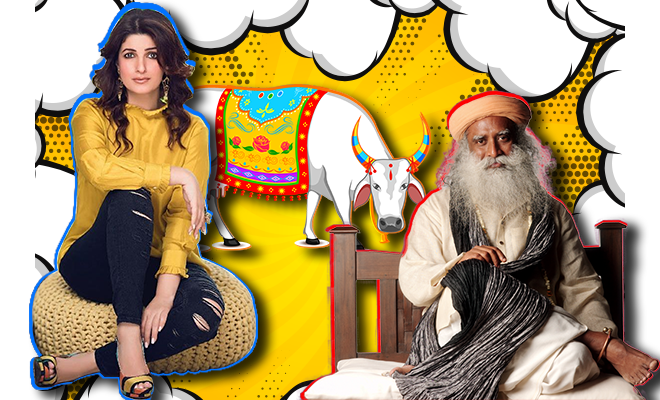 I’ve always been told by my editor, who has mastered the art of dropping kickass puns and using sarcasm as her choice of weapon, that there is a very thin line between being funny and being humorous and offending people with your words. Especially when my line of work is about dishing out words for people to consume. As is that of Twinkle Khanna, otherwise known as Mrs. Funnybones, a nomenclature she takes quite seriously and uses it to her advantage. But perhaps witticism should be reserved for nicer situations. Not when someone has ended up accidentally insulting a sports star. It was a day that should be celebrated, instead we shall remember it for Sadhguru’s recent tweet saying Hima Das was the country’s golden shower.

For the unversed, Sadhguru, is one of the most reputed and saintly figures in India, known for being with the times.  And while we understood the emotion behind his wish, his choice of words was rather poor, for the term ‘golden shower’, has entirely different connotations which honestly, are not suitable if you’re trying to cheer someone on . Now,  Twitter did not let this slide, and neither did we. But Twinkle Khanna, seems to have taken it a bit too far, as she commented, “And here I thought we were all only into Gomutra 🙂 #HimaDasIsTheGoldStandard”. A tweet that all of us could’ve done without.

@mrsfunnybones what's yr achievement in entire life other than gain everything from nepotism. U r flop actress, dumb with brain. When ppl get you then play women card. I wish you get some help from doctor before its too late…..
Get well soon pic.twitter.com/8zhXONT98M

How are people like @mrsfunnybones able to make Hinduphobic jokes about gaumutra without being called out? Does she not know that this is used as anti-Hindu hate speech? Extremely ignorant, offensive behaviour.

The real #Intolerance is here friends.

It must be tough for Twinkle. Having to live up to her ‘funnybones’ name, all the time. Even if you come across as ignorant and insensitive. We are writers, trust us, we understand the urge to make sassy comebacks and use puns that are right in front of us. Low hanging fruit, it is. But when you’re sitting pretty in a position of power and your words have an impact and high visibility, perhaps use that a little more wisely? Hell, you anyway shouldn’t be so insensitive about religion, that is clearly a big sentiment in India.

Needless to say, people weren’t going to stay quiet and immediately took to twitter to slam Mrs. Funnybones for her not so funny dig at Sadhguru. But more importantly, Hima Das, the athlete who has got us 5 medals deserves much, much better. And we think she had it coming. Also because this wasn’t the first time that Twinkle Khanna let her instincts get the better of her. A few months back, Twinkle Khanna doled out some nutrition advice to her followers on Instagram and was called out by a lot of dieticians for being careless about it. After all, there is a reason such things are best left to experts in the field, which she is not.

The former actress however did seem to acknowledge how her tweet may have gone south and was quick to delete the tweet, but not before people had taken screenshots and were already trending on twitter with a backlash. Guess, that is what happens when you don’t think before you write!