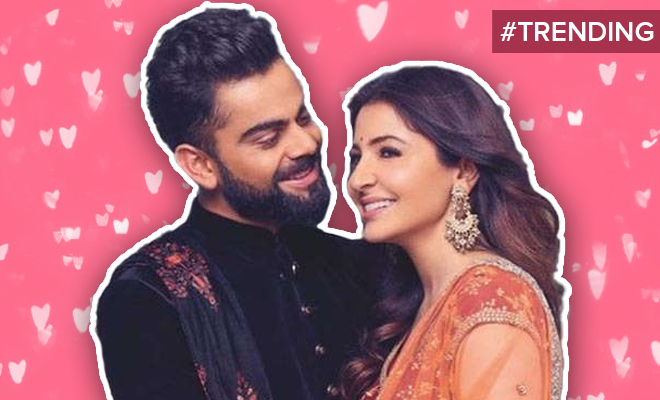 #Trending : Virat Kohli Credits Wife Anushka For Changing Him Into A Better Person. How Adorable Are They?

They say, and by they I mean my parents who bring this topic up every time they want to lecture me on my choice of friends, that the basic nature of any human being never really changes. That essentially, we are who we are and we eventually stick to our basic instincts throughout our life. But in my opinion, if there is something that can hold an exception to that thought, something that can actually change us, and for the better no less, it is love. And we might not be the only romantics claiming the power of love, for ace cricketer Virat Kohli too has recently admitted to feeling like a changed person ever since Anushka came into his life. Grab a tissue guys, here we go..

The love story of these two popular celebrities has been a blockbuster in its own right. From chanced meetings to discreet dates, to finally a secretive but fabulously beautiful wedding in 2017. Almost three years to their wedding, and even now the couple drops major #couplegoals, reminding us what love really looks like.

While in a candid conversation with India teammate Mayank Agarwal on “Open Nets with Mayank“, Virat was asked about his spouse Anushka, to which he had the most heartening response ever. He said, “I give Anushka full credit for making me see a different side of things altogether. I’m so grateful that Anushka is my life partner as she made me realise a lot of things that are to do with the larger picture. My responsibility as a player, my responsibility with who I am today, what that brings along with it. Setting an example for people in the right manner. All these things have come from Anushka”.

Also Read : Anushka Sharma Said Women-Led Films Are Much Braver Because The Story Is The Hero. We Agree With Her

And how often does a man as successful as he is, proudly credit the woman behind his changed, better and successful self without feeling threatened? Rarely. Not only did Virat talk about all the ways he thinks Anushka has made him realise things, but he also continued to say, “If I hadn’t met Anushka I might not have changed as I was not an open person and was very rigid and she’s made me change as a person for good”.

And considering the two are not only leading a happy life together, but also soaring heights professionally, we believe Virat when he says that sometimes the company of your loved one changes you, and when it is like this, it feels like no less than a blessing. Guess it’s right, behind every man there is a woman, and he is not afraid to show her off!

Also Read : Anushka Sharma Said OTT Platforms Are Great But They Cannot Replace The Theatre Experience. We Agree And We Can’t Wait.