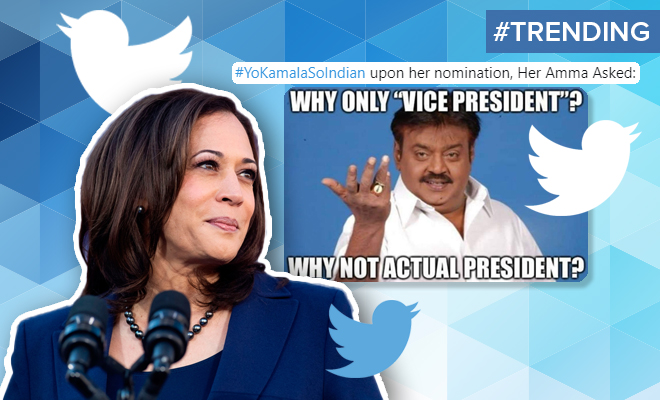 #Trending: Just How Desi Could US Vice President Nominee Kamala Harris Be? Twitter Tries To Guess With #YoKamalaSoIndian

On August 11, 2020, former US Vice President Joe Biden announced Kamala Harris would be his running mate for the US 2020 Presidential elections. This made the California Senator the first African American, the first Indian American, and the third woman to be chosen as a vice-presidential nominee for a major party. Of course, Indians didn’t miss the chance to boast of Kamala Devi Harris’ Indian heritage on her late mother’s side, who had migrated to the United States from India in 1959. Harris has often spoken about how she and her sister would visit her grandparents in Chennai. She has also mentioned how her grandfather, a retired Indian civil servant, with his progressive views on women’s rights, had a profound impact on her.

Naturally, stories around Kamala Harris’ South-Asian heritage have been circulating ever since her nomination was in news. An old video of her and Mindy Kaling cooking some yummy Masala Dosa, a homage to their South-Indian roots, began going viral.

But recently, Twitter saw a new trend emerge, with its own hashtag— #YoKamalaSoIndian. It’s basically desi and NRI Twitter coming up with some hilarious possibilities of how ‘Indian’ Kamala Harris could probably be. According to Twitter, the trend gained momentum after news agency PTI reported that during the California attorney general election in 2010, Harris had asked her aunt in India to break coconuts for luck at a Hindu temple.

And then, once the trend took off, hilarity ensued! From talking about her parents being disappointed that she wasn’t a presidential nominee (because Asian parents want only the top spot) to jokes on how she has a plastic bag full of plastic bags and squeezes her toothpaste until the last bit is out, these jokes truly describe a desi household, no matter what part of the world we are in!

#YoKamalaSoIndian that she matched her kundli with Biden for being his running mate.

She switches off the fan in the morning to wake up family members.

She has an ice cream stick-spoon from 2006 in the Nescafe bottle from 1999, in which she keeps Haldi powder.

#YoKamalaSoIndian that her fridge has 3 shrivelled up limes, 4 dried up betel leaves

So Indian that she uses icecream dabba to keep curry leaves in Fridge.

#YoKamalaSoIndian every month end she used to borrow one tumbler of sugar from her neighbour.

#YoKamalaSoIndian that she dries papad during summer on the driveway. pic.twitter.com/vAZPED8idz

1. She bought a diwali dress which she used only for festivals

2. Then she started using it for office wear

3. Then she started using it for home wear.

4. Then she started using it as foot mat

5. Then finally threw it off.

That she cuts toothpaste like this and uses the last bit #YoKamalaSoIndian pic.twitter.com/VGIVcAgJkI

#YoKamalaSoIndian that she combines 3 used lean soaps to make a new thick one. pic.twitter.com/4WDv2SrUsR

#YoKamalaSoIndian that she tie this on every saturday outside her home, office and under her car pic.twitter.com/UR3fxlkc9W

So Indian that she leaves chappal at entrance of home before getting inside #YoKamalaSoIndian pic.twitter.com/NGMwh4GKta

#YoKamalaSoIndian that she covers the TV remote with plastic.

#YoKamalaSoIndian that she buys gifts for her friends in the US from Giri Traders, Mylapore, during her summer visit to India

Even when she orders for Chinese cuisine, she orders only for Paneer Manchurian. #YoKamalaSoIndian

#YoKamalaSoIndian
She visits chennai every December and eats at Sabha canteen.

#YoKamalaSoIndian when there is no more in the ketchup bottle she puts little water, shakes and pours the watery ketchup 😄 https://t.co/GQJI5rYTCp

So Indian she gave a dabba with lid as return gift in baby shower. #YoKamalaSoIndian pic.twitter.com/NE13gGYKlh

#YoKamalaSoIndian that she uses one bisleri bottle 2000 times before throwing away. pic.twitter.com/RvXVPPAxA6

She collects chilli flakes, oregano and ketchup sachets from Pizza Hut to put in Maggie at home! #YoKamalaSoIndian https://t.co/RSuXKDpNX3

Now look here. A lot of people think this trend is derogatory, and you know that can happen because it is Twitter. Things escalate quickly. But so far, it is has managed to just lightly, and quite accurately mock the desi habits universal amongst all Indians, and the fact that we may disown people for being too Western, but when they achieve some kind of glory, we’re quick to bask in that glory! Whether it is NASA astronauts Sunita Williams and the late Kalpana Chawla, or Kamala Harris, we’re suddenly hyper aware of their Indianness!

Also Read: Freida Pinto To Produce And Star In The Adaptation Of ‘The Henna Artist’, A Feminist Story Set In 1950s’ Jaipur