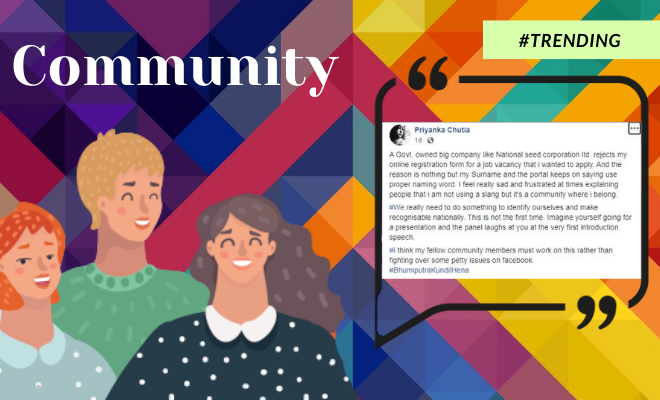 #Trending : A Woman’s Application Was Rejected By A Government-Run Portal Because Her Last Name Is ‘Chutia’. She’s Frustrated With The System

Trying to hold on to a job (if you still have one during this pandemic), or to look out for a new one is possibly one of the hardest things people have had to do in these past few months, other than standing in grocery shop line for hours with a mask on so tight, you’re afraid you’ll pass out in the aisle. And while for most the cause of this difficulty in finding employment is because during a global recession like this, there aren’t many jobs to apply for, for a woman in Assam, the cause of her concern is not corona, but her very name.

Priyanka Chutia, prounced ‘Sutiya’, is one of the many people from an Assamese tribe, whose last name has often been made the butt of distasteful jokes by people. And while not much better can be expected out of people, it was alarming to find out, that even a government run software was in on this idiocy, as they kept denying Priyanka’s application, claiming her surname wasn’t appropriate.

Turns out, Priyanka had been making endless attempts at submitting her application on the online portal of the government-run National Seed Corporation Limited (NSCL), but was constantly being denied as the system didn’t accept her name, mistaking it for an abuse. And clearly, it wasn’t the first time she said it had happened to her. After being denied a job at the an online government-run portal, because her name was Priyanka ‘Chutia’, the woman finally chose to express her exasperation on social media.

Priyanka Chutia had been trying to apply for a job but was unable to do so as the software kept rejecting her surname.

Chutia is a community of people in Assam and it is pronounced as "Sutiya".https://t.co/jICECFTUFp

Also Read : The Kerala Woman Who Ran Behind A Bus To Help A Visually-Impaired Man Was Rewarded With A New House. This Is So Heart-Warming

Bizarre behavior by a state-run corporationhttps://t.co/iT6wHJrpvc

Addressing the issue, she wrote, “…And the reason is nothing but my surname and the portal keeps on saying to use ‘proper naming’ words. I feel really sad and frustrated at times explaining people that I am not using slang but it’s a community where I belong.” The Master’s graduate from Gogamukh town also went on to then elaborately talk about the community she belongs to, which is one of the state’s oldest ethnic groups.

After writing about it, as the matter was brought to notice, her application was finally accepted. But this wasn’t the only case when people with a controversial surname like hers were met with such a disappointing result. Many people even on the social media giant – Facebook, have been blocked because of their similar surnames, just because the word is offensive and a slang in the Hindi language.

Also Read : #Trending : Police Officials In Chennai Convinced The Employers Of A Woman Recovered From Covid-19 To Give Her Her Job Back. We Think This Is Great