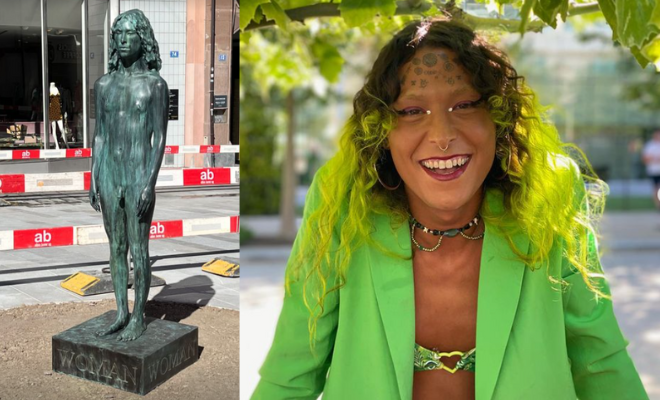 While the representation of the LGBTQ+ has increased over the past few decades, it is clearly not enough. Cis-het people have been getting their fair share of representation in classical and modern art but it is undeniable that queer art is just now gaining popularity and acceptance, however, very sparsely. Amidst all this, artist Puppies Puppies aka Jade Guanaro Kuriki-Olivo has installed the first known bronze statue of a naked trans woman with “woman” written on the plinth of the sculpture at Art Basel and the piece arguably makes a very simple and straightforward statement: a trans woman is just that, a Woman.

A work regarded as the first public sculpture featuring a naked, openly trans woman was unveiled as part of this year’s Parcours segment at Art Basel. The piece is a life-sized bronze statue in the form of classical sculpture, designed by the American trans artist Puppies Puppies (aka Jade Guanaro Kuriki-Olivo) and based on a 3D scan of the artist’s body. The word “woman” is written on the plinth of the sculpture.

Kuriki-Olivo said that trans people have historically been erased, murdered, arrested, and banished daily. She added that when one looks at trans history, there are many gaps that can only be filled by storytelling. Kuriki-Olivo said that her existence is revolutionary in such an environment and that she must be highly present in the world. She claimed that it is critical to her that this sculpture be displayed in public.

Also Read: Delhi Hc Says Insisting Transgender People To Undergo A Sex Change Surgery To Get A Passport Is Violation Of Article 21

Kuriki-Olivo was born in Dallas and now lives in New York, says she was inspired by Europe’s long history of presenting the naked body via classical sculpture, as well as of censoring gender nonconforming viewpoints, for her piece. She claims that during WWII, the Nazis burned a number of medical materials critical to the expansion of health services for trans individuals.

Kuriki-Olivo notes that other public monuments depicting trans persons exist and have done so for decades. A bust of LGBTQ+ activist Marsha P. Johnson was put last year near the Stonewall Inn in New York to commemorate her important involvement in the historic riots of 1969. Having a permanent, solid piece that may go on after passing her is “new and intriguing” according to Kuriki-Olivo, who is most recognized for her performance work. Her 2017 artwork Liberty (Liberté), which alludes to drag culture and the Statue of Liberty, is still the Whitney Museum of American Art’s only performance work. Her object-based art is also heavily influenced by ephemerality and decomposition. She displayed a calf’s brain perforated with the hormonal and prescription drugs she is taking in 2021. The outdoor installation collapsed over the length of the exhibition.

Olivo’s work comes amid a time when trans rights in the United States and internationally are under attack, with a slew of new laws barring trans persons from public spaces such as bathrooms and sports teams, as well as denying them complete bodily autonomy. According to sources, Olivo believes that the presence of her artwork will foster, “some sort of empathy and understanding of what some trans people’s lives are like”.

Saira Banu Breaks Downs Asking Bharat Ratna For Her Husband Dilip Kumar, Says He Is The ‘Kohinoor’ Of India