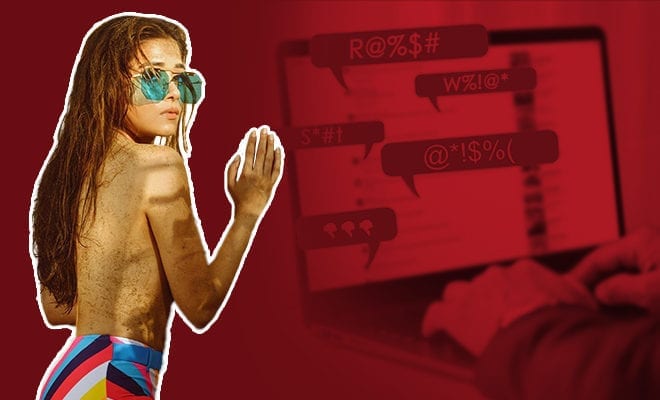 Tina Datta Taught A Lesson To Troll Who Left Nasty Comments On Her Picture. He Apologised And Called Her Sister

Television actress Tina Datta was going about her day, minding her own business, exercising her freedom of choice to dress the way she wants, to post a picture she wants to and have her own agency. She posted a picture of herself in bikini bottoms sans the top, with her back towards the camera. But like many penis-proud men, a guy found it so unbearable that he kept on abusing her in the sickest possible way in the comment section. Had she done anything to him? Did she chop his penis off and run away with it? Did she volunteer to give up her agency and do as this random boy pleases? What makes him think he has any say in what she wears? Owning a penis apparently is enough, as he several times mentioned it in his comments.

Tina captioned her post, “Mind if I heat up the temperatures? I thought the new month deserves a change! P.S. This is a picture that was edited but I think if you are comfortable in your skin, its all ok…. Remember do what makes you comfortable without worrying about what others think! (sic).”

In a country like ours, slut-shaming a woman not covered head to toe is so common, it’s almost expected by a few trolls. But this guy kept hurling abuses at her, saying all sort of nasty things that I wish his parents to read and used such derogatory words. And he refused to give up, almost like he was offended on a personal level.

Tina then shared the screenshots of the comments on her story and wrote, “Is that the kind of upbringing you guy’s get?” She shared more of his comments, writing, “And he wouldn’t stop… bring it on you loser… seems like that’s how you talk to every other women.” She even tagged a cybercrime official, urging him to take strict action against this guy.

That’s when later the guy apologized and even addressed her as “di”. He was previously offering his penis and saying all sorts of nasty things to Tina Datta. And suddenly, she comes “Di”? She shared that too and wrote, “And now suddenly I become Di.. such losers.”

ALSO READ:Asha Negi Schooled A Troll Who Commented On Her Picture Asking Her To Get Married Now Because She Is Old.

Recently, she had shared another stunning beach-y image with the caption, “The most exciting, challenging and significant relationship of all is the one you have with yourself…. And that is so true from one of my favourite shows Sex In The City! Anyone else a fan? (sic).”

Tina Datta can wear what she wants and she is not answerable to anyone, especially not to a random boy sitting in some corner of the country spreading filth online!

ALSO READ:In UP, A 17-Year-Old Boy Killed His Sister Because He Didn’t Like Who She Was Dating. WTF?