Throwback Thursday: Maine Pyaar Kyun Kiya Is About A Pathological Liar And Women Who Have No Standards When It Comes To Men 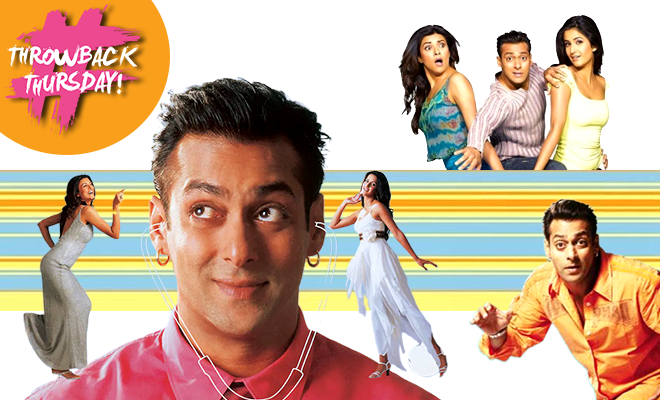 Of all the things that make me very aware of my singlehood, Maine Pyaar Kyun Kiya is the worse one. I consider myself likeable and have no trouble making friends on occasions when I do interact with people. I am blessed with friends who are always there for me and even in my family, I have been the favourite child. In fact, when I hadn’t given up on meeting guys, I got a lot of male attention and had people crushing on me. But right now, I am single and the very unlikeable lead characters in Maine Pyaar Kyun Kiya are not.

The movie opens with Sonia (Katrina Kaif) trying to commit suicide by leaving the gas on. She is lying on her bed, in a pretty pastel dress, looking like she’s just shot a body lotion commercial. Why? Just because she had a fight with Sameer (Salman Khan), her boyfriend. She is saved by her creepy neighbour, Pyaare (Sohail Khan), who hugs an almost-dying woman and takes undue advantage of her while also passing some shady remarks. However, she doesn’t feel weird at all and goes on to befriend this man.

Now she believes Sameer is married but is a good guy because he is honest about fooling around with her. Sameer, is not really married though – that’s just what he tells the several women he fucks around with. You know, so he can play with their feelings and then just disappear into thin air using his imaginary wife as an excuse.

Funny thing is that Sameer actually fell in love with Sonia and now he must find a way to divorce his non-existing wife. Naina (Sushmita Sen), Sameer’s assistant comes to rescue, or is rather pulled into it through the latter’s emotionally manipulative ways. So Sameer asks her to be his wife and conveniently forgets to leave out the part where it’s all going to be just an act. In that half a minute, you see her blushing and actually wanting to marry him. And I was like, woman have some standards! She knows what a womaniser and narcissist this man is and still for some reason she wants to marry him. Like why? I would rather die single.

Clearly, Sameer is not really a likeable character and takes advantage of the niceness in others. In fact, he is a pathological liar and has little to no empathy in his system. He looks at women as sex objects. But what about Sonia? If dumbness was an Olympic sport, she’d beat everyone and win a gold. She attempts to kill herself over every little thing and it’s easier to play her than playing x-and-0 with a five-year-old.

Pyaare wants Sonia, Sonia wants Sameer, Naina wants Sameer but doesn’t admit and Sameer’s mom wants to save her son’s fake marriage. The women in this movie have no standards and the men have no moral compass, which can seem like they are kind of made for each other. At least, other people won’t suffer, except us watching the movie.

In the end, Sonia tells Sameer to fuck off with Naina because she is his woman but only kind of. You know, the type who can take care of his needs and nurture this manchild-ness. Sonia marries Pyaare instead because he is really good at saving her life, and because this game of ‘I’m going to kill myself, save me’ can be entertaining for a lifetime. I mean, having a suicidal tendency is not a joke and she needs a mental health professional.

ALSO READ: Throwback Thursday: Judwaa Was Dismissive Of Consent, Stupid About Twin Relationships And A Sexist Piece Of Trash

Naina, you deserved better. She is a wonderful woman who is attractive and smart, except in love. Maybe if she went out more often, she would have realised her worth. The rest of them, I have one question – tumne pyaar kyu kiya? And if you did, why did we have to watch it?