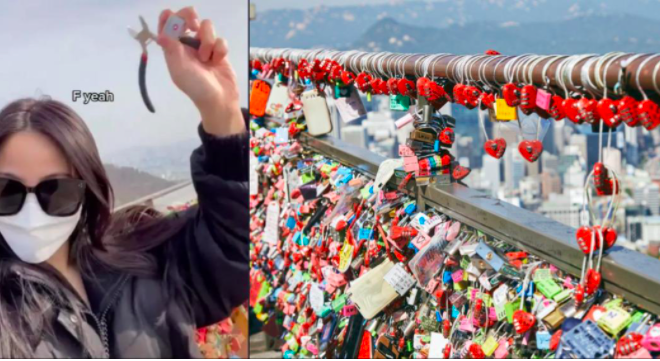 When you’ve been through as many traumatic breakups as I have, you start developing a kind of routine to get over them. It’s sort of like the six degrees of separation (any The Script fans in the house?) but there’s a lot more rage, pettiness and binge eating. It’s no secret that breakups bring out the worst, most bizarre, side of one’s personality. However, some people take it to a whole new level. Look at this woman who flew from the US to Korea to destroy a love lock that she had once shared with her ex-boyfriend. We love this!

In 2019, Lassie Yeung and her boyfriend bought a small lock, wrote their names on it, and clipped it alongside the N Seoul Tower in South Korea. Just like the bride in Paris, this spot in South Korea is favourited by couples who clip locks on it as a symbol of their love. But of course, after a break up that symbol becomes null and void. Hence, Lassie flew 10,000 km across the Pacific Ocean to destroy their lock. Now, that is the level of petty I wish to be someday.

imagine having that much money to burn https://t.co/j5Dp6kmsPw

Also Read: Women Share The Unexpected Good Things That Happen After A Breakup

Lassie documented her entire journey from Los Angeles to South Korea. She travelled via a plane, bus, cable car and then hiked to the summit. Once she found the lock clipped there by her and her ex, she removed the pair of pliers she was carrying through the journey and broke the lock. There is so much depth in this one video. Which is rare on TikTok. Not to mention, it has garnered over 5 million views.

However, whether Lassie flew to South Korea from Los Angeles specifically to find that one love lock and destroy it hasn’t been confirmed. I have to ask but, how rich do you have to be to travel to a whole other country to take down a lock? Although a lot of netizens expressed their own desire to return to Paris and destroy their own locks. If I had a love lock with one of my ex’s anywhere in the world, I too would want to go back and take it down. Who wouldn’t, right?

Mexican Woman Stabs Husband For Cheating On Her After Failing To Recognize Herself In Old Photos Of Them. This Is Bizarre.