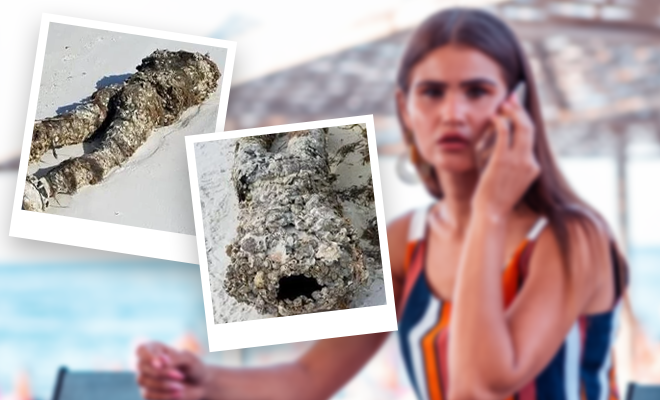 This Woman Called 911 Thinking She Had Found A Dead Body On The Beach. It Wasn’t That

I am glad this year is nearly over. It has honestly been one of the most taxing and tedious years ever. The worst part? I think it’s going to leave us all with small doses of agoraphobia coupled with a whole lot of germophobia. And it’s because we can’t leave the house that we have started depending on social so much more. In the last few months, I have seen things on social media that I could’ve gone my whole life without knowing. For instance, a woman in the USA called emergency services after coming across what she thought was a dead body on a beach. But what it turned out to be a *spoiler alert* rotten mannequin. The whole this is so bizarre that it’s hilarious.

The incident came to light after a Facebook page called Ocean Hour shared images of the mannequin that one of their volunteers, Kathleen, mistook for a dead body. The post read, “Volunteer Kathleen was walking the intercoastal side in Perdido Key…when she came across what she thought was a dead, decapitated body. Another visitor had even called 911.” Further adding, “Upon further investigating, she realized it was a mannequin!”

As it turns out, the only reason that the mannequin looked like a “dead and decapitated body” was that it had been in the sea for too long and was covered in barnacles and seaweed. Okay, let’s be honest. That would freak anyone out, right? It’s so nasty-looking that it would make for an ideal Halloween decoration.

Also Read: The Latest Tik Tok Trend Has People From Around The World Adding Contraceptive Pills To Their Shampoo’s To Make Their Hair Grow. What Even?

Volunteer Kathleen was walking the intercoastal side in Perdido Key…when she came across what she thought was a dead,…

This post is going viral. After being shared a few weeks ago, it has garnered ver 3,300 shares along with more than 2,500 reactions. Netizens have very mixed reactions about this. Some are terrified by this bizarre thing while some think it’s kind of cool. I just find it extremely hilarious. Finding a mannequin that looked like a dead body would be a great prank to play on someone, don’t you think? Disclaimer: try at your own risk.

We are just glad it wasn’t a real dead-body but another bizarre incident.

GET HAUTERFLY IN YOUR INBOX!
Related ItemsFeaturedUSATrendingwoman finds a dead body but it turns out to be a mannequinFloridabeach in Floridamannequindead body