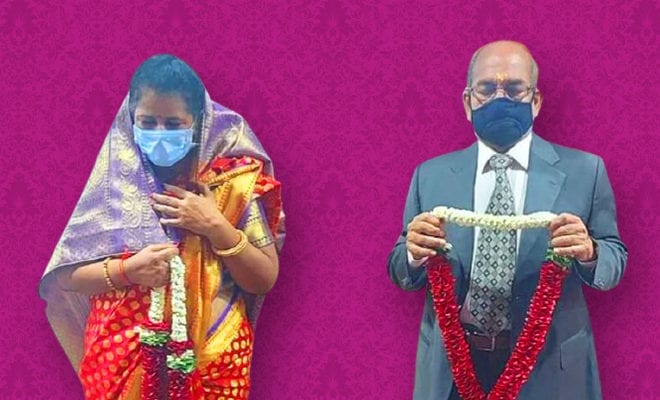 This Woman Shared How Her Father Remarried Five Years After Losing His Wife. It’s An Adorable Story

Somewhere along the way, our society forgot that marriage is more about companionship than it is a norm. We’ve got it all confused. Getting married isn’t mandatory because it’s not about your age or your religion. It’s about you not growing old by yourself and not being lonely. Isn’t that why the institution of marriage was created in the first place? So then explain something to me. Why does our society make it such a big deal when a widow or a widower remarry? Personally, I think it’s adorable when two people get another chance at love. Age is just a number. For instance, look at this man who remarried after five years of losing his wife. In what world can anyone think this is problematic?

This 71-year-old man recently remarried five years after losing his wife. The woman he married is a widow herself. On Tuesday, his daughter, Aditi, posted a picture of this man and his new wife on Twitter. It has since then gone viral. Netizens are reaching out and showering the couple with praise and love. This couple got married (or remarried) in their sunset years despite all odds. We love everything about this!

In her post, Aditi mentioned all the hurdles her father had to face while trying to remarry. From women asking him for money and ghosting him to legal problems, his journey has not been easy. Aditi wrote, “This is my 71-year-old father, remarrying after being a widow for 5 years, to another widow. I have always wanted him to remarry because no one deserves to be lonely. But it has been complicated. There are no straight forward legal rules in India for remarrying. There were women who asked for money. There were women who ghosted him. We still don’t know if society will accept them. We still don’t know if they will adapt to each other.”

In the picture posted by Aditi, the newlywed couple can be seen standing next to each other, wearing face masks, with varmalas in their hands. It’s an adorable picture and we laud them for taking this step. A lot of widows and widowers choose not to remarry because they fear society’s opinion. But it’s as I said, this isn’t about age or whether you have been married before. It’s simply about companionship. Like Aditi said in her post, no one deserves to be lonely. We

We wish this newlywed remarried couple all the happiness!

In Mysuru, A 73-Year-Old Woman Put Out An Ad Looking For A Companion And She Found One!

GET HAUTERFLY IN YOUR INBOX!
Related ItemsFeaturedMarriageTrendingWomanmanremarriage71-year-old man remarried woman