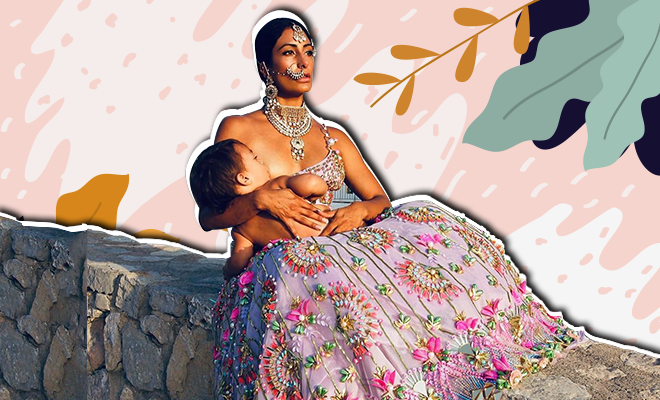 This Woman Put Up A Post About Breastfeeding In A Lehenga And While It Was Beautiful, It Completely Missed The Point

Some people think it’s easy and slightly whimsical, but a major part of my job is in fact to scroll down my social feed and look for cool and interesting stuff that we could write or talk about. And during one such scroll, I came across a rather beautiful post on Instagram of a woman looking stunning in a lehenga, breast feeding her little child and looking fierce AF. Naturally drawn to the picture, I was eager to dig deeper into the context behind it, but much to my disappointment, what I found out was not what I had expected at all.

The incredible post in question here, is of a Shayoon Mendeluk from Ibiza, Spain who put up gorgeous pictures of herself feeding her child for the breastfeeding week, but ironically, not talking about it or addressing it even once. The caption of her post reads, “!FOR ALL MY DESIS!!- This ones especially for you. and to all my people living in fear…In honor of #worldbreastfeedingweek I was asked and humbly accepted to share my life story with @browngirlmag titled SHAYOON MENDELUK: STORY OF A BROWN GIRL WHO DID EVERYTHING A BROWN GIRL IS TOLD SHE SHOULDNT (f*****g love this). Being of South Asian descent- I speak about letting go of your fear and living your life for YOU, Not your parents, not anyone else.”

Also Read : Soha Ali Khan Once Had To Pump Breast Milk In An Airplane Bathroom. What About Breastfeeding Is Offensive?

Now you see, there is only so much that comes to the mind when one reads ‘In honor of the breastfeeding week’, and all of that is obviously related to a mother and her child. However, what she talks about in the post has absolutely zero relevance to the kind of a picture she has put up and we are sort of left confused. Are we missing out on a point here or is she?

She further mentions in the post, “Living in fear causes and manifests into illness and disease. Fear is a disease. You don’t have to be pressured into a career, a relationship or any of that bs because your parents want that for you. It’s emotional blackmail. Do you, do what makes you happy or you will live the life you’re trying to escape forever. If you’re gay, come out. If you’re unhappy change your life. We make shi* so complicated sometimes. But guess what? You hold the power to EVERYTHING. Your mind and body is the strongest thing you have, and when trained and used properly, can generate anything you want. Don’t worry about the past, or the future because they don’t f****** exist. Find your purpose. The purpose of life is to live your purpose!! Heal, grow, and then help others do the same!”

And trying hard to find the purpose behind such a caption and a picture that suggests entirely otherwise, we failed miserably. Don’t get us wrong here, we are in awe of the woman trying to make a point by confidently and beautifully promoting breastfeeding, and even inspired by her story about doing everything she was told not to. But, we just don’t think she is doing it right. Maybe next time she could throw in more than just a hashtag, you know, to actually make a point that is really about it.

Swaraj Kaushal Is The Man Who Stood Behind Sushma Swaraj As She Shone. India Needs More Secure Men Like Him