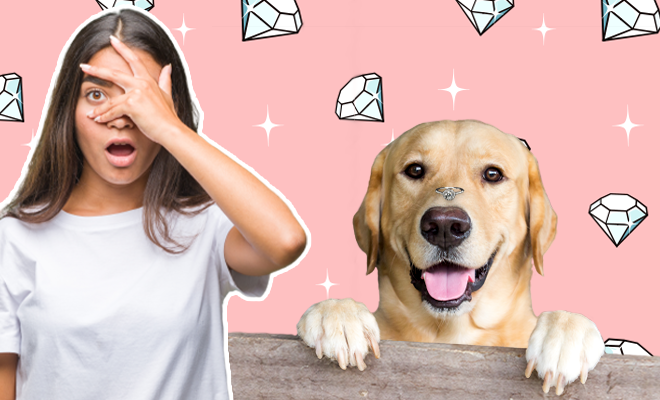 This Woman Announces Her Engagement By Putting Her Diamond Ring On Her Doggo’s Nose. This Didn’t End Well

We have been under lockdown for nearly 8 months now. I know that it isn’t technically a lockdown anymore but I am not moving around freely yet, are you? While the entire world learns to adapt to the new normal, our coronavirus numbers our going down but we cannot throw caution to the wind just yet. At a time like this, social media has played a huge role in getting us through this awful time. Think about it, where would we be without our daily dose of memes and drama? The latest video that had me laughing till my insides hurt was of this adorable little doggo who gobbled up his owner’s engagement ring. Well, the owner is also to blame in this. You’ll know why.

You see, this woman wanted to announce her engagement and thought of a very creative solution to do so. She put her engagement ring on her dog’s nose. Under normal circumstances, this would be an adorable way to announce your engagement. Because well, doggo. But I have a strong feeling that she regretted her idea very soon because her dog confused the diamond ring to a treat and gobbled it up.

The video of this unfortunate incident has been doing the rounds on Reddit. Oh, don’t judge me but I have been lurking around on Reddit a lot. I have a damn cool job. Anyway, in this now-viral clip captioned “What could go wrong if I show off my new engagement ring?” (Apt, huh?) the woman can be seen gently placing the ring on her golden retriever’s nose and asking him to “stay”. The dog obeys her direction for a few seconds with the cutest expression on his face. Then without a warning, flips his nose and bites down on the engagement ring. Of course, this shocked the woman who was filming this but we would’ve loved to see what happened next.

Also Read: This Man Blamed His Cat For His Wife’s Pregnancy But Not In The Way You Think. The Story Is Hilarious

WCGW if I try to show off my new engagement ring? from Whatcouldgowrong

Okay, I have to say that golden retriever is the most adorable dog. Did you see his expression when she placed the ring on his nose? I just wanted to hug him. BRB, I am going to go cry a little now. Is it normal that I am more focused on the dog than the ring? I know my mother would say it’s not. If I was in that woman’s shoes though, I would get the shock of my life. But it’s common sense. Don’t put anything inedible on your dog’s nose. Least of all, an expensive diamond ring. How do you think she broke the news to her fiance? Do you think he believed her as all our teachers believed it when we told them our dog ate our homework? That’s a conversation I would love to be a fly on the wall for.

I have watched this video over and over again and every time I laugh just as much as I did the first time. You have to admit, it’s hilarious. Of course not for the woman. I actually feel a little bad for her. Losing your engagement ring is one thing. Having your dog eat it is a whole different ball game where I don’t think there are too many players. Usually, people just click loved up pictures of themselves are engagement announcements. Maybe she should’ve stuck to the cliche.

This Woman From Thailand Accidentally Dyed Her Cat Yellow And Now It Looks Like Pikachu!