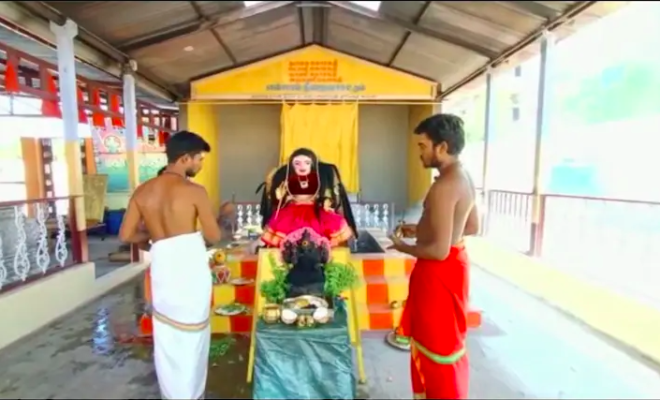 This Tamil Nadu Temple Got A ‘Corona Devi’ Idol To Protect People From The Virus. No, We Are Not Kidding

Fighting a known enemy, one you know everything about, one whose moves you can guess and play you can predict still gives you a fighting chance against your opponent. But what about the enemy that you cannot see, that slithers into homes and does it ever so quietly? Second-guessing their every move and unable to track what it might destruct next? That is the kind of an enemy that Coronavirus has proven to be for us. Mutating itself, growing stronger, spreading like wildfire, attacking even in the most unlikeliest of situations, the virus has had its upper hand over us for a while now.

People join hands (only figuratively, because social distancing..) to fight this fight against the virus, with frontline workers working everyday to protect us all, policemen patrolling to ensure people are inside their homes, people donating to relevant causes, we are fighting it, or at least attempting to. Especially in Tamil Nadu, where the people have decided to create a corona god in itself to help save them from its wrath.

Bringing into existence a “Corona Devi”, authorities at the Kamatchipuri Adhinam, a temple in Tamil Nadu’s Coimbatore have consecrated a deity that is supposed to protect them from the lethal and dangerous coronavirus that has taken the world in its group.

Also Read : Women Around The Country Hold Coronavirus Pujas To Please The Coronavirus Goddess. We Don’t Know What To Say

Giving a new spin to the “Incredible India” slogan that is often used for our country, people of Tamil Nadu have shown us that there is no stone they are willing to leave unturned to win against the virus. Sivalingeswarar, the man in charge of the temple shared that it has been a long drawn practice for them to create deities that would in turn protect the people from disease and death.

A few of such deities include Plague Mariamman Temple in Coimbatore that people created to protect them from the ill effects of plague and cholera outbreak all those years back. And so, with yet another virus loose in the city, Kamatchipuri Adhinam has decided to bring to life a “Corona Devi”, that is going to be carved in granite and prayers shall be presented in front of the idol for 48 long days.

It has also been issued that Maha Yagam will be held during those 48 days during which people will not be allowed to visit the temple to offer prayers. Whether or not this is a suitable solution to the problem in hands is more of a question of faith than it is of sensibility.

Also Read : This Durga Puja Pandal In West Bengal Depicts Goddess Durga As A Doctor Killing The Coronavirus. We Are Loving This Tribute