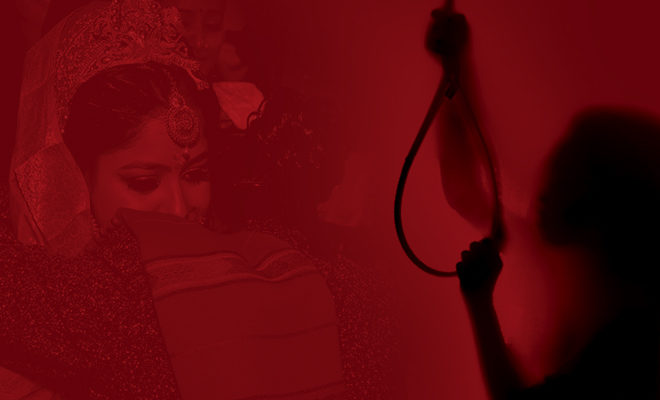 Considering I write about violent crimes against women every day, I can tell you that the frequency at which women are brutally raped is alarming. But you know that already. It’s not a well-kept secret. What you might not know is that a lot of families, on learning that their daughters have been sexually assaulted, insist that they marry their rapist. This is a very popular concept to save a families honour. Don’t even get me started on how problematic it actually is or this will be a much, much longer article. In no way can this end well. It only means more suffering, trauma, a life of abuse for the woman and in some extreme cases, suicide. It’s shameful that families do this to their daughters. Although, we have none other than the oppressive patriarchy to blame for this.

Today, we are discussing a heartbreaking tale of a girl from the Camp area of Pune who was forcefully married to her rapist. Merely a year after their wedding, she committed suicide and was found dead inside her home on Friday. Her husband, identified as Rohit Raju Pawar, and his mother have been arrested for driving the girl to suicide. If Rohit had just been arrested and sentenced for sexually assaulting this girl last year she would still be alive today. It’s sickening that she was knowingly put through all that torture and abuse.

To the mothers and society, pls don't give your daughter to a rapist, rape is a crime and should be jailed for the offence and not be asked to Marry the accuse.#WakeUp https://t.co/5vIZNUAgsm..

According to reports, Rohit and the now-deceased girl are distant relatives. He had gotten in touch with her in 2019 when her family had visited his family over the summer. Rohit went to jail for 3-4 months for sexually assaulting her. A police officer investigating this girl’s suicide said, “He was in jail in 2019 for sexually assaulting her and had been released after a few months. The girl had lost her father in 2017 and he pressurised her mother with maligning their reputation by telling their social circles that he had raped the daughter in order to get the mother to marry the girl to him. The mother gave in and in June 2020, the girl was married to him.”

Once the two were married, Rohit suspected that the girl was having an extramarital affair. According to the girl’s mother’s complaint, he would verbally and physically abuse her. He had also started asking the girl for money from her parents to support his drinking habits. Unable to bear all this torture, the girl committed suicide and was found dead on Friday.

This girl was failed by our system and her own family. How exactly is getting a sexual assault victim married to the assailant a viable idea? That man belonged in jail to pay for his crimes. Instead, he was roaming free making this girl’s life so miserable that suicide was the only option available to her. It’s disgusting. How many more girls have to suffer and die before we see the error in our ways?