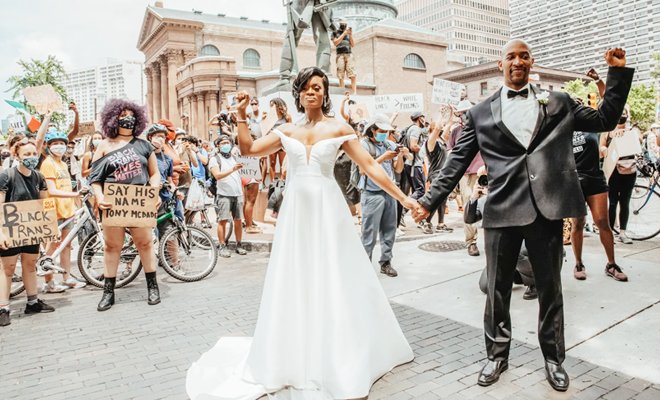 This Couple Celebrated Their Wedding By Joining A Peaceful Black Lives Matter Protest. It’s Nice To See A Little Love During These Times

As you all must know by now, the murder of George Floyd at the hands of four white police officers gave rise to violent protests all around the USA and several other countries. George Floyd’s murder was the tipping point for the Black Lives Matter movement that had slowly been gaining momentum for six years. These protests turned very violent very fast and it led to a whole new array of problems like looting and more police brutality.

That being said, these protests are essential considering that George Floyd’s murder was not an isolated incident. These protests are fueled by the anger and the anguish that the black community in America has had to endure at the hands of the police and unfortunately fellow racists for years. However, not all the protests were violent. In fact, on Saturday, the black lives matter protest in Philadelphia was extremely peaceful as thousands of demonstrators took to the streets. However, two of the protesters in the protest stood out for a very special reason.

Kerry-Anne and Michael Gordon had just tied the knot at a hotel that was in the path of the demonstrators. As soon as they tied the knot and came out of the Logan hotel to click pictures, they were greeted and cheered on by the protesters. The couple made an impromptu decision of joining the protests themselves. It was extremely beautiful and especially at one point where the demonstrators made way as the couple held hands and stood in solidarity with them.

Also Read: This Couple Got Married In A Chapel At The Hospital They Work At After Their Wedding Got Cancelled. How Romantic Is This?

This couple celebrated their wedding day at a Black Lives Matter protest in Philadelphia pic.twitter.com/VkXxJk14OW

Kerry told ABC News that, “It ended up being a very powerful moment,” Kerry-Anne told ABC News. “Not only are we feeling the movement of the people … but I’m meeting my husband, on our wedding day, as a strong black man and a good representative of who we are as people, what our men are like, what our culture is like. It was just a very, very empowering moment for us considering all of this is happening at one moment in one time.”

Micheal, is of Carribean descent and Kerry is a doctor by profession who was born in Jamaica. The couple had to postpone their big New Jersey wedding because of the coronavirus pandemic but still wanted to get married. They went ahead with a “micro wedding” in the lawn of the hotel even though they knew it was in the path of the demonstrators who were marching from Philadelphia Museum of Art to City Hall that afternoon.

The couple did not intend to be a part of the protest but they both agree that it was the best decision and more so considering they both felt extremely connected to the cause. Kerry and Micheal both felt that seeing people of all races come together to peacefully protest against racial bias made their wedding day “more memorable.”

Micheal said, “We all see this injustice. We all want to see this needle shift away from the status quo and … that made this day more memorable in ways.”

Also Read: This Indian-American Gay Couple Had A Big Fat Indian Wedding. One Groom’s Father Talked About How He Was A Homophobe And His Speech Is Beautiful

A couple just got married along the protest route in Philly, and then immediately joined the march. pic.twitter.com/U5aPx3WOtJ

Videos of this couple holding hands and kissing while all the protesters cheer for them amid the protest has gone viral. Netizens are absolutely fawning over the newlyweds and showering them with love. Also, can I just add how absolutely gorgeous Kerry’s wedding gown is?

Micheal and Kerry then walked all the way to City Hall (the end destination) with the protestors.

This story just tugs at all the right heartstrings. It’s just so nice to see a little love amid such horrid circumstances. We hope that these protests end soon but also that their cause is heard and implemented.