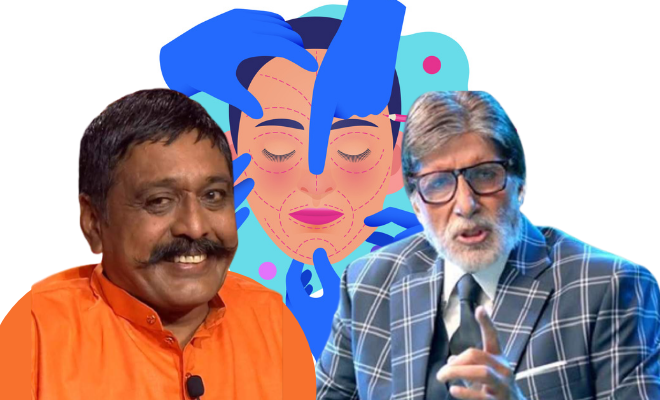 This Contestant On KBC Said That He Would Use The Prize Money To Get Plastic Surgery For His Wife. It’s Not Funny

What would you do if you won a crore rupees on Kaun Banega Crorepati? This is a question Amitabh Bachchan asks all the contestants who manage to find their place on the hot seat. If it were me, I would probably take this extravagant world tour or something. Here’s the thing though, when contestants answer the question it’s usually something common like buying a house or a car but this one man decided to give an answer that was so misogynistic that even Amitabh called him out on it.

The incident in question happened when Koshlendra Singh Tomar, a man from Madhya Pradesh found himself sitting on the hot seat. He is the secretary of gram panchayat in his village. The highlight of his Kaun Banega Crorepati episode came when Amitabh asked him what he would do with the winning amount. Koshlendra replied saying he would get plastic surgery done on his wife’s face. Of course, Amitabh asked him, “Plastic surgery but why?” Kolshendra went to explain his extremely sexist reasoning. He said, “15 saal se ek he chehra dekh ke bore hogaya hoon (I am tired of seeing the same face for the past 15 years).”

When he saw Amitabh’s reaction, Koleshendra said he was joking. But is really the kind of “joke” people want to hear on national television? Hell no. This is the kind of joke a leechy uncle makes on a family group and everyone else sends a thumbs-up emoji because they don’t know how to react. It’s extremely misogynistic. Amitabh laughed along, because well the camera’s were rolling. But he also told the man’s wife to not listen to him and then told Kolshendra that he shouldn’t say such things even as a joke.

Also Read: The Crowned Prince Of Saudi Arabia Sent Jeff Bezos A Sexist Text. These Jokes Are Not Okay

But it’s not just on Kaun Banega Crorepati…

When are men going to learn to stop making these kinds of jokes? It’s neither funny on WhatsApp nor on television. The day they understand this and stop making jokes like these will be a day to celebrate. Until then it just seems like we have to call them out one by one. He said his wife needs plastic surgery because he bored of looking at her face. And not to mention he said it on Kaun Banega Crorepati, a show that seems to rake up more TRP than Bigg Boss. I don’t understand, was he trying to be funny? Because hasn’t been his wife been staring at his spiteful face for the same amount of time? Maybe she can trade him in for someone less horrible to her.

As far as his game goes, Kolshendra did not win any big bucks. He was stumped at a question and went home with merely Rs 40,000 in his pocket. Yes, that’s also a large amount but it’s not as much as most contestants win on the Kaun Banega Crorepati. And I like to think karma had a little something to do with it.

Jokes like these are not funny. Claiming your wife needs plastic surgery is not amusing to anyone. When will people get it? These “uncle jokes” need to stop because they are sexist and highly misogynistic. It’s time we stop standing for that shit.