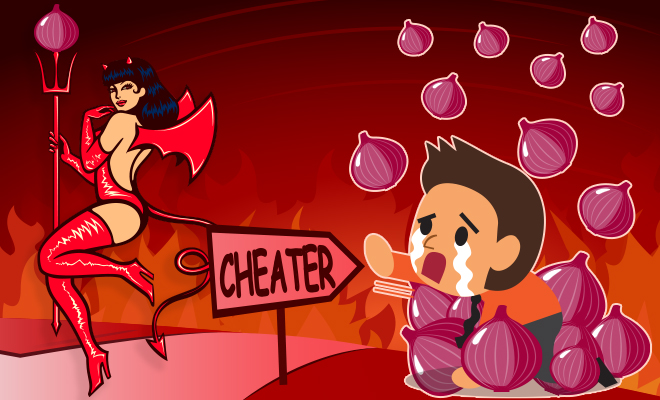 This Chinese Woman Sent Her Cheating Ex-Boyfriend A Thousand Onions To Make Him Cry As Much As She Did. This Is A Stinky Revenge Story

I think an amicable break up is only a thing in movies and TV shows. I mean, take Ross and Rachel for example. Would you be able to hang out constantly with an ex who cheated on you? (They weren’t on a break!). If a guy cheated on me, I would want to destroy him. But since all means of that are probably illegal, I would do the next best thing- stay away. But wanting revenge is justifiable too, on paper (executing the plan is whole different ball game).

It stands to reason that the millennial take on dating, across the globe, has one thing in common- it’s always complicated. Today’s generation has very extreme reactions to someone cheating on them and most of the times it ends with them plotting a horrid revenge scheme. You know- threatening to send their ex’s nudes to everyone, sleeping with the best friend (this happens more than you know) or even spreading rumours that could potentially ruin the other person’s reputation. Side note: please do not pick up ideas from here, it’s an awful thing to do.

Anyway, as I said, revenge is a real factor in today’s (very questionable) dating scenario around the globe. Having said that, there are two kinds of revenge- one that boils your blood as a reader and the second that tickles your funny bone and makes you feel sorry for the person on the receiving end. Have you ever noticed we don’t hear too many stories from the latter category? And that is exactly why today I am telling you a revenge story that is funny and refreshing (for us, not for the ex-boyfriend involved).

Also Read: This Guy Just Gave His Girl The Perfect Quarantine Movie Date Experience. Where Do We Find Ourselves A Guy Like This?

Ms Zhao (her first name hasn’t been mentioned), is a heartbroken woman in China who went a long way to make her ex-boyfriend (who remains nameless) cry over their breakup. She dumped a tonne of red onions on his doorstep to make him weep as much as she did.

Do you believe that? She had 1,000 red onions delivered to her ex-boyfriend with a note that read, “I’ve cried for three days, now it’s your turn”. According to reports, they had been together for over a year, but he was cheating on her and she wanted revenge. Ms Zhao had specifically given instructions to the vegetable delivery people to just dump the onions on his doorstep without contacting him.

Social media footage shows a delivery man dropping off a truck-load worth of onions on his doorstep at a residential compound in Zibo, Shandong of eastern China. Reportedly, upon failing to contact the ex, the deliveryman spent four hours moving all the onions from the truck to his doorstep.

The reason that she did all this was that Ms Zhao found out from mutual friends that her ex had not shed a single tear over their breakup while she was utterly devastated over it. But is this the best way to make someone repent?

She told the local news, “’I heard from my friends that he was not upset at all after breaking up with me. I spent three days at home crying. I was so heartbroken. So, I ordered a tonne of onions to his home. I’ve got money, I wanted him to know the taste of tears.”

"I've Cried, Your Turn": Woman Sends A Tonne Of Onions To Ex As Revenge https://t.co/odIUnsB4WG

Needless to say, that when the footage of sacks and sacks of onions being delivered to a man, made it to social media, it went instantly viral. The ex-boyfriend told a local publication that he broke up with Ms Zhao because of her “over-the-top behaviour”. Well, at least we know he isn’t lying about this.

He said, “My ex-girlfriend was very dramatic. She is telling everyone that I haven’t shed one tear since our break-up. Am I a bad person for simply not crying?”

Am I a bad person for laughing my ass off at this poor guy? Now, we have no idea whether he cried or not after receiving the onions. Though his neighbour said that they were ticked off because their entire compound only smelled like onions. This is so funny that it is making me want to send a few hundred onions to my ex just to see his reaction.

I do have one question though- anyone who has ever cooked anything with an onion knows that you only cry when you cut them. So, was Ms Zhao thinking that her ex was going to find these onions and try and chop all thousand of them? I mean, this is a horrible revenge plan (hilarious for the rest of us, but bad). All she did was ensure her ex never had to buy onions ever again. If you think about it, her plan contradicted itself. I mean, instead of making him pay, she ended up helping him save so much money. In fact, if I was the ex-boyfriend, I would mark up the price and sell all those onions and make a little extra.

She should’ve sent him dog poo instead, I have heard it’s much more efficient.

Well, at least it’s a revenge story that we can all laugh at and it’s not making me want to impale someone. I consider that a win.

Tell me something, would you send an ex 1,000 onions if they cheated on you and showed no remorse?

This Guy Surprised His Wife With His Questionable Guitar Skills Proving It’s Important That You Try. Twitterati Is Loving It!