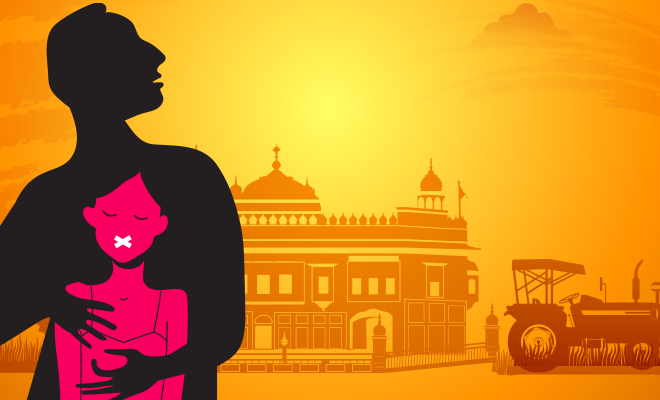 When I think about one of Mahatma Gandhi’s most famous quotes, “The future depends on what we do in the present”, it sends chills down my spine. And how can it not? Look around you, our country is failing its women every single day. So yeah, if our future is even slightly based on our present, we are in deep trouble. Did you know that gender-based violence has tripled over the last year? But how does that matter, right? It’s not like women have rights over anything, even our bodies. Statistics show that in India, a woman is raped every 15 minutes and in a lot of the cases, the accused is related or known to the victim. However, the case we are discussing today has left me absolutely stunned. A 13-year-old boy raped his 7-year-old sister who has Down’s Syndrome. What is happening to this world?

This horrifying incident took place in Ludhiana, Punjab. A 13-year-old boy raped his 7-year-old sister who has Down’s Syndrome. To make matters worse, their mother covered up for her son and chose to blame the school they attend instead. According to reports, on Wednesday, the mother picked the girl up from school while the boy returned home on his bicycle. Once home, the mother told the boy to help his sister with her studies and left the room to do household chores. This is when the boy raped his sister. The mother found out about the crime when she changed her daughter’s clothes and found blood on her private parts.

Based on the victim’s statement, the 13-year-old boy has been arrested by the Ludhiana Police. According to them, the girl studied in lower kindergarten while her brother, the accused, was a student in the 8th grade in the same school.

I think it’s high time mothers stopped pampering the sons and held them accountable for their actions, don’t you? Especially if their actions are as heinous as sexually assaulting their younger sister.

Also Read: A Man Raped A 22-Year-Old Girl, Filmed The Act And Shared The Video Online After She Got Married. Her Husband Left Her.

The police said that the mother slapped her son when she found out what he had done but proceeded to shield him anyway. She tried to shift the focus by saying her daughter was raped on school premises. ACP (north) Gurbinder Singh said, “during the probe, it was found that there was no male teacher in the school and the CCTV footage showed that the girl was absolutely fine when her mother picked her up from school around 2.10 pm. CCTV cameras installed inside the school were also checked, and nothing was found. The boy was questioned after the girl’s statement and he confessed his crime. We have arrested the girl’s brother and he has been sent to a juvenile observation home.”

However, on Thursday when the police went to arrest the accused, there was major resistance from the locals. People were implying that the police is arresting the boy in an attempt to protect school authorities. They were only pacified when the police told them that it was the victim herself who had named her brother as her rapist.

I don’t understand. How does a 13-year-old boy think about raping his younger sister, one who has Down’s Syndrome? We are clearly going very, very wrong when it comes to bringing up our sons. They need to be held accountable, disciplined and taught values like equality and respect. Instead, mothers are shielding their sons and trying to pin the blame elsewhere. Some would argue that at least the accused’s mother slapped him for doing what he did. But let me tell you, loud and clear, that is not enough. I, for one, am glad the victim spoke up for herself and told the police it was her brother. Otherwise, he would’ve gotten away with it despite the parents knowing what he had done. It’s sickening and disturbing, to say the least.

Boys really need to be educated on the right things and held accountable for all their actions, the bad and the ugly.

Two Men Spiked A Girl’s Drink, Raped Her On A Stationary Bus And Then Dumped Her On The Road.