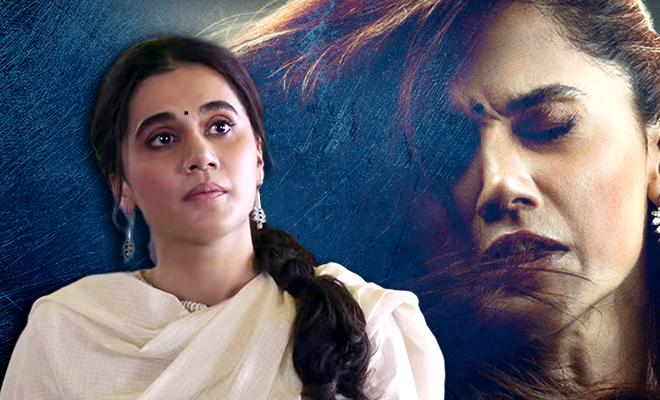 There are movies that are made for mass consumption – the Dabanggs and Housefulls of the world- and then there are movies made for a niche audience. At least, this is what we have been told for the longest time. And because lazy entertainers that rely on sexist and slapstick comedy to make the box office go kaching continue to pull in the audiences, it’s what filmmakers keep serving us. Which is why, when you have a movie about women that might seem to serious or the kind that will ruffle a few feathers, everyone gets uncomfortable. Because the women in these movies are not apologetic, like Taapsee’s character in Thappad, the trailer of which, just dropped.

The trailer had me hooked from the word go. And slowly, as you go through the trailer, you realise this is everything every woman in India has been fed. Fed in mouthfuls or small morsels, but definitely fed. With this film, the kind of social conditioning that women in India are put through is highlighted.

From the commonly believed tropes to how often the women are asked to just ‘deal with it’ everything about the trailer resonated with me. This is the kind of BS that needs to be stopped. And we’re glad that a movie is finally talking about it.

Priyanka Chopra Says No One Was Willing To Tell Women’s Stories, So Women Became Producers. This Needs To Be Heard

What I absolutely loved about the trailer is that the woman is finally taking back control. Despite what society will tell you, what your parents, siblings and “well-wishers” imply, it’s important that every woman sets boundaries on how she will be treated and Thappad talks about exactly that.

From the very start, you know that the slap is just a metaphor – a small symbolism for the oppression a woman faces. The movie’s poster also has the line, ‘Bas itni si baat?’ (isn’t this too small an issue?) implying that a slap or possibly one tiny moment of physical aggression shouldn’t be seen as a reason to break off a relationship. But as the trailer goes on, you realise it is not about that one slap. That was just an amalgamation of all the things that had happened before it. And that this slap is possibly the final nail in the coffin.

A moment that particularly stood out to me was when a lady tells Taapsee’s character that women have to deal with it all, that’s a woman’s job. It clearly isn’t and we are not having it any other way. Thappad isn’t just a slap in the movie, it is a slap on society’s double standards and we are here for it.

Dear Internet, Rolls On Women Are Normal. Can We Stop Slut Shaming And Body Shaming Priyanka Chopra For Her Grammys Dress Now?