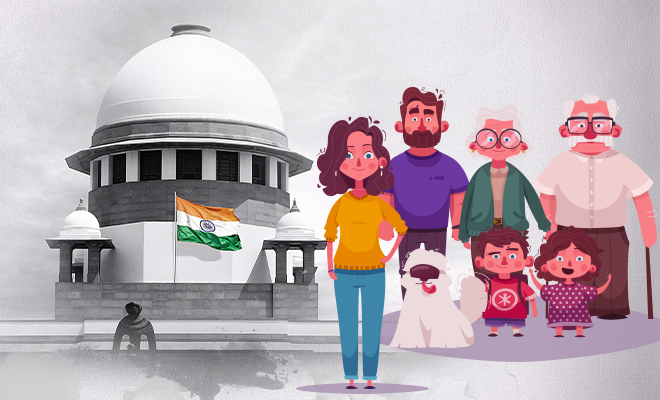 The Supreme Court Has Ruled That A Woman Who Is Estranged From Her Husband Can’t Be Evicted From Their House. This Was A Much-Needed Judgment

Here’s the thing, women’s rights have never been given any importance. This lockdown has shown a clear picture of where we stand. From domestic violence to rapes, crimes against women have doubled in these last few months. And clearly, the police are of no help. However, the consolation we have right now is that the Supreme Court and all the High Courts in the country are doing their best to safeguard women’s rights. For instance, the Supreme Court has said that a woman can stay in her husband’s house, even if she is estranged from him. The husbands family does not have the right to evict her. This ruling was aimed at curbing domestic violence.

This ruling came after the court observed that domestic violence has become more prevalent in society. And a few women encounter some form of violence every day. The court said that under such circumstances a woman faces a never-ending cycle of violence and discrimination. A bench made of Justices Ashok Bhushan, R Subhash Reddy and MR Shah said that, in the Domestic Violence Act, a woman can’t be thrown out of her husband’s house even if they are estranged from each other. This ruling will preserve the woman’s rights. They will no longer be left without a roof over their heads.

This judgement dismissed an appeal filed by Satish Chander Ahuja. He challenged a Delhi High Court judgment which was made in 2019. That judge ruled that his daughter-in-law Sneha Ahuja had the right of residence even though she was in the process of divorce from her husband Raveen Ahuja. The Supreme Court dismissed his appeal and upheld the High Court judgement.

Also Read: A Supreme Court Advocate, Kiruba Munusamy Shares How She Was Fired From Her Job For Taking A Period Leave. How De-sensitized Are We As A Society To Menstruation?

‘Domestic violence in the country is rampant and every day some women encounter violence in some form or other,’ the court said.https://t.co/HXZsQDBZ79

Satish Ahuja had also appealed that his son had no share in the house as the property was his self-earned. He interpreted the provisions of Section 2 (shared household) and Section 17 (right of residence) under the Domestic Violence Act. To this, the judges said, “The definition of shared household given in Section 2 (s) cannot be read to mean that shared household can only be that household which is household of the joint family of which husband is a member or in which husband of the aggrieved person has a share.” Hence, rejecting this appeal as well that stated Satish’s son had no share in his property.

At a time when we are all starting to see the cracks in our patriarchal society, it’s nice to know that our judiciary is safeguarding and propagating women’s rights. This particular ruling has set a great precedent for future domestic violence cases where the in-laws are refusing to give the woman her share or are trying to evict her. For a lot of women, this comes as a ray of hope because when dependent financially on their husbands, a divorce or even the thought of it, cannot be entertained because the woman can end up homeless. In this case, she gets a little time to secure a job or arrange for funds before she leaves the husband’s house.  Hopefully, the courts will continue to stand by us and rule in favour of those women who are suffering at the hands of their spouses or in-laws.

This 77-Year-Old Woman Wants To Study Law And She Has Moved The Supreme Court To Challenge The Age Rule.