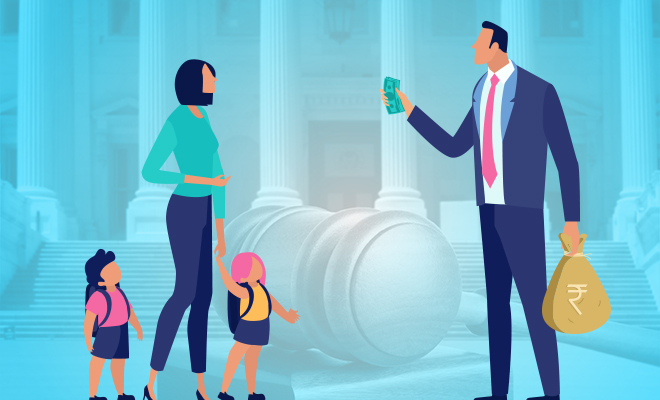 Have you ever noticed how when any circumstance boils down to a ‘he said versus she said’ situation, it’s usually the man who wins the argument? Women are always at a disadvantage. We are either called pathological liars or hysterical or just plain crazy. That’s how men got away with all their crimes are wrongdoings, big or small. However, this isn’t how it’s going to be anymore, our judiciary is making sure of that and we can’t be more grateful to them. Recently, in a rare ruling, the Bombay HC ordered a man’s employer to cut his salary by 1 lakh. That amount is to be paid to the man’s estranged wife and children after he did not pay her the interim monthly maintenance despite a court order. At least this woman doesn’t have to fight for her dues anymore!

The 40-year-old man in question is an aeronautical engineer who earns around 5.5 lakh per month. He owes his estranged wife nearly 30 lakh rupees in interim maintenance arrears. And hence, the court observed that even though the man earns a “handsome salary” he is avoiding the interim payment to his wife and children. We are glad the court stepped in.

According to reports, In 2018, the wife filed a domestic violence complaint against her husband and his family members. In early 2019, the magistrate court ordered the man to pay the wife interim maintenance. Following this, the man moved the sessions court. In April 2019 though, the sessions court asked the man to pay his wife Rs 2,000 within a fortnight since there was a delay with the appeal. Here comes the twist though. A few months later, the man returned to the sessions court and said that he was unable to pay the amount to his wife since he was unaware of the order. He said that he was working in another city and due to a technical glitch in the court’s app.

The court observed that the aeronautical engineer earns a "handsome" salary and directed him to pay Rs 1 lakh as maintenance to his wife and kidshttps://t.co/GAh90Ml9c2

Also Read: “Menstruation Has Been Stigmatised In Our Society”: Gujarat HC. Court Proposes Law To Allow Women Access To All Places During Periods

However, the sessions court observed that the man was lying. He was, in fact, present in court when the order was passed. His plea was rejected. In November 2019, the woman moved the court for an attachment to the man’s salary. She claimed that he had only paid her Rs 2 lakh since the court granted maintenance in February 2019.

Obviously, the man opposed this and moved the Bombay HC. He claimed that his wife was lying about being unemployed. However, the hearing was delayed due to the pandemic. The court stated that the man was obliged to pay his estranged wife the interim maintenance. The judge said, “It appears the husband is earning a handsome salary. Prima facie he is avoiding paying interim maintenance to his wife and children. Therefore, it will be just and proper to direct the (employer) to attach the salary of Rs 1 lakh per month towards the recovery of arrears till further orders in the interest of justice.”

This is a rare case. But we are glad the court stepped in and asked the man’s employer to deduct Rs 1 lakh from his salary and redirect it towards the woman. Let’s hope the court keeps passing judgements that help women in need out, instead of making privileged men further more privileged.