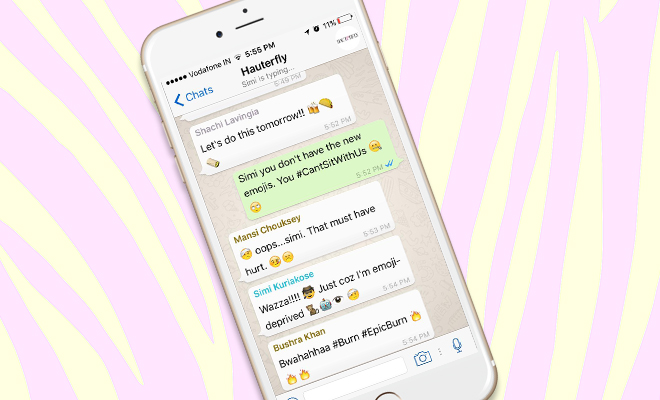 WhatsApp Has Come Out With New Emojis!

Android users, rejoice! WhatsApp has finally rolled out new emojis that include several new expressive faces including rolling eyes, real sad smiley, hugs, upside down face, spider, unicorn, champagne bottle, nerd, robot face, and many more. Previously, you only had 6 tabs on the emoji keyboard, which has now gone up to 8 tabs filled with new stuff. You’ve got new facial expressions, new characters, plus a separate beverage tab for all you foodies out there!

Just another day at #HauterflyHQ!

This update is also available for iOS, Windows and WhatsApp web. If you can’t seem to find the new emojis, update your version and hang in there as the new update is gradually being made available on Google Play.

Once you’ve got them, don’t forget to show us how you made use of them. Team Hauterfly went kinda bonkers, as you can see above!