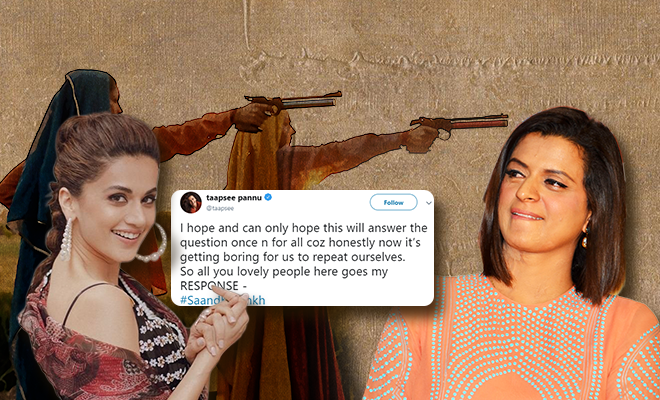 Usually when any two people pick up a fight in Bollywood, it ends with one spiralling out of control and going overboard with drama, while the other decides to take the high road and stops reacting. However, it doesn’t matter what parties are involved, Rangoli Chandel will be there to give her two cents and further fuel the fire. And for a while, people have been pandering to her and been nice. Except Taapsee isn’t having any of it. And we say this after reading what Taapsee Pannu had to say about Rangoli Chandels recent tweet over her upcoming movie Saand ki Aankh.

Also Read : Neena Gupta Talked About Ageism In Bollywood And She’s So Right. We’ve No Idea What Rangoli Is Talking About Though

The movie, that is based on two octogenarians Prakashi and Chandra Tomar, who became sharpshooters in their 60s, has Taapsee Pannu and Bhumi Pednekar playing the challenging roles. And there is no second guessing the fact that they have indeed held up their end of the bargain playing them fabulously and sinking their teeth into the roles. But recently, when veteran actress Neena Gupta took to twitter to point out how roles closer to their age must atleast be offered to them, referring to Saand Ki Aankh, we were all made to think how it does, in fact, make sense for filmmakers to consider actors and actresses for age appropriate roles.

Neena ji Kangana was offered this movie and she loved the true story of Grandmom’s achievements she suggested yours and Ramya Krishnan ma’am’s name for lead roles but these men can’t remove deeply rooted sexism from their filthy brains … https://t.co/f81LXDE5hg

However, it was Rangoli Chandel’s tweet that got the matter boiling, for she once again spoke in matters that do not concern her in any shape or form and said, “Neena ji Kangana was offered this movie and she loved the true story of grandmom’s achievements she suggested yours and Ramya Krishnan ma’am’s name for lead roles but these men can’t remove deeply rooted sexism from their filthy brains….We will never have a Meryl Streep in India if we keep shamelessly displaying older women phobia like this… shame on you all Bolly filth… for promoting sexism in the name of feminism.”

I hope and can only hope this will answer the question once n for all coz honestly now it’s getting boring for us to repeat ourselves.
So all you lovely people here goes my RESPONSE –#SaandKiAankh pic.twitter.com/guldaTWaks

To which, the Mission Mangal actress Taapsee, had a considerably heartfelt and thorough reply, as she wrote, “I wonder… I just wonder… Do we ever want to embrace the positivity or just keep latching on to negativity and glorifying it to save our lack of risk taking tendencies. Have we really lost the shoulder along with our spine to support people who venture out of their comfort zone to bring about a change???? Or it’s just reserved for two females who at relatively nascent stage of their career venture out to do something, which we were told, most of the people turned down? I wonder …. I just wonder… Did we ask the same question when we all loved what Anupam Kher did in Saaransh. Did we question when Nargis Dutt played mother to Sunil Dutt? Did we question John Travolta for playing a woman in Hairspray? Did we question Eddie Murphy for playing a white Jewish man in Coming to America? Did we question when Aamir Khan played a college kid in 3 Idiots ? And in the future are we going to question Ayushmann Khurrana for playing a gay man in Shubh Mangal Zyaada Saavdhan? Or these lovely allegations and questions ore reserved only for us??? Well even if it is… we thank you from the bottom of our heart for noticing our little effort to bring to you something new, something different , something you all want to comment on, something you all want to attach yourself to, be it in any way, and something that attracted your attention. After all cinema is also about thought. Let’s keep the discussion going and hope your questions will be answered and doubts will be cleared this Diwali kyuki hum toh aa rahe hain iss baar pataake nahi goliyaan barsaane. Thank you for all the love and attention you have bestowed upon our small film with BIG heart!”

Now, we do understand what Taapsee means when she quotes all the movies that have had actors and actresses playing roles older and younger to them. Bollywood, and acting per se, is a creative field and filmmakers don’t just enjoy but also take liberty of the creative freedom they get with it, to experiment. And if there is anything, it becomes one of the main reasons why people buy a ticket to go and watch it in the theatres too.

While we commend Taapsee for taking on such a challenging role and delivering well on it, and understand what she means by it being a great thing for cinema, we still agree with Neena Gupta.  There is so much more room to have a more appropriate casting in movies, with such talent available at every age!