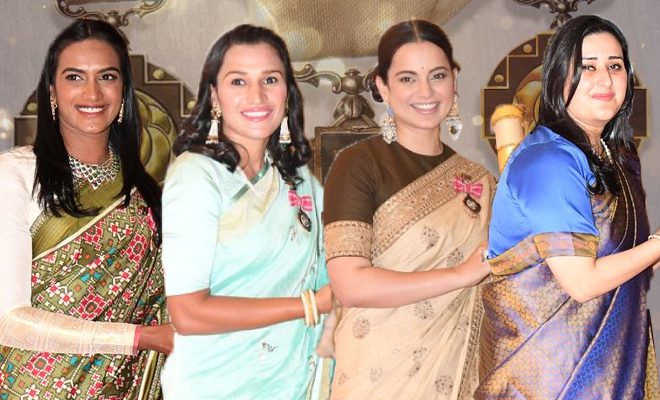 Women in India in recent times have created nothing short of history. I mean, women for the most part have been deprived of opportunities and seeing them fighting their way through all the misogyny and patriarchal notions and coming out as a winner, the feeling is something else. In fact, for quite a while, women were even deprived of recognition for their hard work. They have been taken for granted for so long – whether it be housewives or women in any other fields – that it is refreshing to see when a woman actually gets recognized for her efforts. Yep, I’m talking about the Padma Awards 2020 where 29 women – including the late Sushma Swaraj, PV Sindhu, Kangana Ranaut, and others – from around the country not only got appreciated for their efforts but also were recognized for their hard work and dedication.

President of India, Ram Nath Kovind presented 119 Padma Awards in total today, November 8, 2021. Out of the 119 awardees, 29 of them were women, including Kangana Ranaut, PV Sindhu, the late Sushma Swaraj, Ekta Kapoor, and others who have excelled in their field and brought about a change with their work.

Here is a list of a few of the many women who won at the Padma Awards 2020 and were honoured by the President of India himself:

President Kovind Padma Bhushan to Kum. P.V. Sindhu for Sports. A leading Indian badminton player, she is the first Indian ever to become a badminton world champion. She has also won the silver medal at Rio Olympics. pic.twitter.com/32v07Hfd6H

President Kovind presents Padma Shri to Ms Kangana Ranaut for Art. She is an Indian film actress and filmmaker, who is widely recognised as an actress par excellence. pic.twitter.com/xOqBAt1VoA

President Kovind presents Padma Vibhushan to Smt Sushma Swaraj (Posthumous) for Public Affairs. A visionary leader, deeply rooted in Indian traditions, Smt Swaraj embodied the empowerment of women and was a woman of many firsts. pic.twitter.com/hP8aRpBSGu

President Kovind presents Padma Shri to Ms Rani for Sports. She is the captain of the Indian women's hockey team and has represented Indian in over 200 matches. She is also a recipient of the Arjuna Award by the Government of India. pic.twitter.com/zo6rf093NX

President Kovind presents Padma Shri to Smt Sarita Joshi for Art. She is an award-winning stage, television and film actress. She has performed in about 15,000 shows in Gujarati, Marathi, Hindi and Marwari over a span of six decades. pic.twitter.com/noVOSJTa8y

I feel so honoured and blessed to be living in a time with such dedicated and hard-working women. Watching women like Sushma Swaraj, Rani Rampal, Kangana Ranaut, and many others getting appreciated for their hard work is a very special feeling that is very difficult to put in words. These women have been a guiding light and source of inspiration for many young girls who are passionate about their work.

Kangana Ranaut Is Arguing With Shashi Tharoor About Paying Salaries To Housewives. It’s Resulted In Memes!