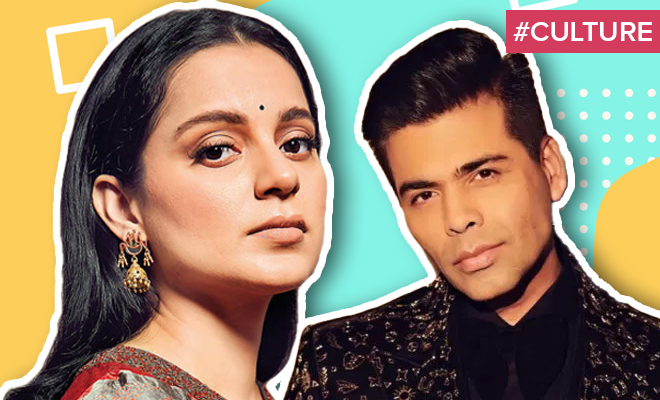 I vividly remember Kangana Ranaut’s ‘nepotism’ moment on Koffee With Karan. I was shooketh, because the audacity you need to pull something off like that on national television is sizeable. To say that to Karan Johar’s face, the dream director-producer for every starry-eyed Bollywood actor…. In that moment, she became a hero to many. But as Harvey Dent from The Dark Knight said, “You either die a hero or live long enough to see yourself become a villain.” As Kangana’s outrage against the deeply nepotistic movie industry became increasingly infected by personal and political agenda, she didn’t let the matter die a natural death. And now, what we have is a debate that she has kept alive by incessantly feeding it with conspiracy theories and rants. Sushant Singh Rajput’s passing seems to have put her in an overdrive. So much so that every new rant of her has the people say… 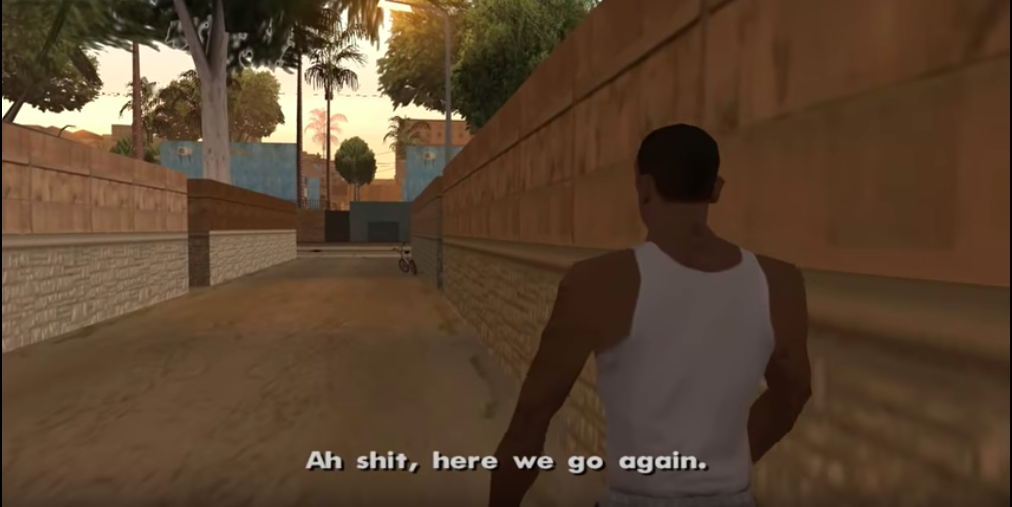 You have to give full props to Kangana for recycling the same old pitches with flair. This time around, her crusade against nepotism has her requesting the Government of India to take Karan Johar’s Padma Shri back. Why? Because, one, he openly intimidated her and asked her to leave the industry. This happened back in March 2017, when Johar was on stage at the London School of Economics and was asked about Kangana calling him ‘movie mafia’ and ‘flagbearer of nepotism’. He replied that she could not play the victim card every time, and if she had an issue with the industry, she could leave it.

And two, KJo’s banner, Dharma Productions, produced Gunjan Saxena: The Kargil Girl, which has raised an outrage for its portrayal of gender bias in the Indian Air Force (IAF). The film, a directorial debut of Sharan Sharma, and second film of star kid Janhvi Kapoor, seems to have struck a nerve with the IAF. Batchmates of the real Gunjan Saxena have extensively denied the “lies peddled” by the makers of the film.

That’s not all, though. Let’s not forget (although, how would we since we’re constantly reminded of it by Kangana Ranaut) how KJo plotted to destroy Sushant Singh Rajput’s career. He also cast Pakistani actors in his movies (Fawad Khan in Ae Dil Hai Mushkil) and supported Pakistan after Uri.

There wasn’t a video this time, there was a tweet that said all of the above.

I request government of India to take KJO’s PadmaShri back,he openly intimidated me and asked me to leave the industry on an international platform,conspired to sabotage Sushanth’s career,he supported Pakistan during Uri battle and now antinational film against our Army. https://t.co/KEgVEDpMrF

Tell us something we don’t know, says an incredibly unamused audience

If movies have proven anything, it is this—we love a good ‘started from the bottom now we here’ story. When Kangana first began her tirade against nepotism, it felt like a movement could be born. See, she was asking the right questions; holding the right people accountable. Bollywood’s camp behaviour feels like a school group project. All the friends team up with each other and the unpopular kids get left behind, no matter how talented and skilled they are. So calling that out was needed. But where’s the politics coming from, hon?

Suddenly, Kangana Ranaut wants to shame industry people for supporting the anti-CAA/NRC protests. She blames Karan Johar for a movie that is highlighting sexism in our military which, I might add, is not that far-fetched an idea. Her call for justice for what happened to Sushant Singh Rajput is to attack nepotism, and that makes sense. But gaslighting fans into trolling and abusing her fellow Bollywood peers to further a personal vendetta? Not cool.

on an individual happens openly and we all are all guilty of watching it silently. Is blaming the system enough? Will there ever be change? Are we going to see a monumental shift in the narrative on how outsiders are treated?

In one of her videos, Kangana Ranaut spoke about how she also battled depression when she was put down for her comments against the industry. This would’ve been a good time to talk about her own mental health struggles and how she emerged out of it. Because no matter how SSR left us, the fact that he was battling depression remains unchanged. Instead, the Judgementall Hai Kya actress harped on and on about Manikarnika‘s failure, even made a few allegations. And eventually, she quietly withdrew from the whole drama once the ‘murder’ angle began being explored. Now she is back, because the dialogue can once again be shifted to nepotism.

As for the IAF and gender bias issue in Gunjan Saxena, you cannot declare people anti-national for questioning unfair biases in their government institutions, dear Kangana. Nobody, neither the real Gunjan or the reel Gunjan, is saying that the IAF was biased as an institution. We clearly see in the movie that it is a chosen few officers who exhibit bias. And that cannot be neglected, especially since it was only as recent as February 2020, when the Supreme Court of India had to shut down inherent gender bias propagated by the Centre when it rejected permanent commission and command roles for women in the army. What reason did they cite?

“The composition of rank and file being male, and predominantly drawn from rural background, with prevailing societal norms, the troops are not yet mentally schooled to accept women officers in command.” In fact, there was also a case made for how difficult it would be for the service and the government if female officers were taken as POWs (prisoners of war). This sentiment was portrayed as is in the movie as well. Again, nobody is accusing the IAF or Gunjan Saxena’s batchmates and seniors of blatant sexism. But it is merely the creative devices used by the makers to indicate that these are just additional hurdles that women have to overcome to prove themselves, while men can simply saunter in with their capabilities.

Can we get this over with?

Kangana Ranaut was once again in the news when Naseeruddin Shah seemed to have alluded to her when asked about the nepotism debate.

“No one is interested in the opinions of some half educated starlet who decides to take it upon herself to, you know, get justice for Sushant. If there is justice that needs to be done, I think we need to have faith in the process of the law and if it is none of our business, I think we should not concern ourselves with it,” he told India Today.

He further dismissed the entire charade surrounding the Chhichhore actor’s death, and called out those who were leveraging the tragic circumstances to forward their own vitriol against the film industry.

“It is absolutely sickening. I have not followed it. I felt deeply grieved when the young man died. I did not know him but he had a bright future and it was a waste of a life. But I did not bother to follow the nonsense that’s being spouted by a whole lot of people. Every person who has any little frustration in his mind, in his heart, about the commercial industry, has been vomiting it out to the press. It is absolutely disgusting. I mean, keep these complaints to yourself, no one is interested.”

And doesn’t he make absolute sense? Can we end this circus already, which has a new ringmaster every other day? Cleaning up nepotism is going to be easier said than done, because it is part of a deeply flawed system. There’s no one blanket way to do this; by downvoting star kids’ movie trailers or writing abusive DMs and trending your hashtag on Twitter. It has taken years, and still sexism prevails in the industry. What makes us think that nepotism, born out of our basic human instinct to protect our own, will be so easy to eject?

Kangana Ranaut’s case has become a ‘cry wolf’ scenario. I want to believe her. I do. I want to believe that she’s here for justice and not for some personal agenda. I want to see this inside-outside difference gone. Today, I see a Pankaj Tripathi, a Viineet Kuamr Singh, or a Rajkummar Rao excel and I feel hungry for the works of more such talent.

But the fact that Kangana lets her sister, Rangoli Chandel, spew hatred on Twitter, or her ‘team’ handle her social media and offer blind support to the government over questionable politics makes me loathe to trust her motives. As if that wasn’t enough, she continues to target individual actors, Alia Bhatt, Taapsee Pannu, Swara Bhasker, Richa Chadha, and now Kareena Kapoor Khan and Aamir Khan, for basic things like, oh I don’t know, breathing against the government? What is it, really? Why are we getting petty? Is this some twisted real-life version of Mean Girls? Is there a kill-switch for this K-serial melodrama? Are people getting paid to do this and support this?

Because how else do you explain Kangana congratulating KJo for his Padma Shri, (they both got it this year) and then asking that it be taken away?

The worst part of it all, is that it’s never a healthy debate, is it? It’s not like one side made a valid argument and the other side listened to it patiently and then refuted with a sensible argument of their own. It’s just a bunch of the same old people trashing each other, looking like kids fighting on the playground for a chance at batting! (It’s Karan Johar’s bat so his team will bat first.) Her own fans want her to give it a rest.

I think its good that you raising your voice in sushant singh rajput case but now from a while you spreading more of a negativity .. Everyday you targeting people . stop being frustated now on everything. we audiance love u trully .

Hi Kangana I agree with you all the time but asking govt to take back Padma Shree is illogical. Govt has given for different reason. Now they can only decide to not acknowledge karan further as I am not sure if govt has ever taken back any award once given.

Ma’am I m a big fan of yours but now plz stop this allegation games …. I don’t know who is right or who is wrong but why to pull some one down every day something new from side ….. plz stop this and maintain each other basic respect …. don’t pass such below the belt comment

How about we have a proper televised debate (not with Arnab, stay away) with both parties on the floor, hashing it out raw and real? Otherwise, it keeps being a case of “he said, she said.” And only TRPs and hashtags win.

Also Read: #Trending: Kangana Ranaut’s Team Takes An Not-So-Subtle Dig At Kareena Kapoor By Retweeting An Old Video Of Hers. This Is Getting Very Old Now