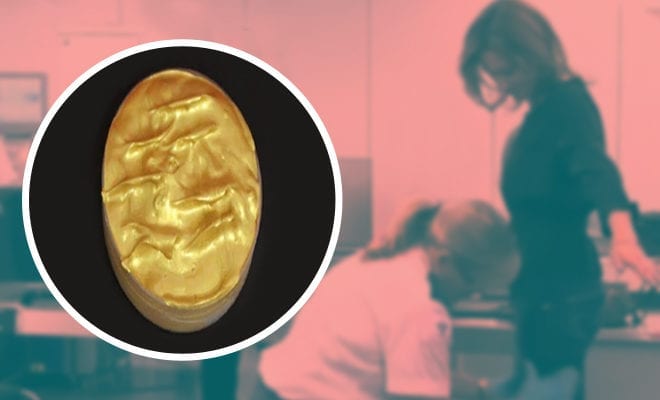 Thanks to movies like  Now You See Me, Fast And Furious, Dhoom and many more like them, we are very well acquainted to the concept of robberies, heists and smuggling. And even though the kind of jobs that we see criminals pull in such movies are a tad bit too OTT, there is still a hint of believability attached to the storyline. Something that we couldn’t possibly say for a woman, whose very real smuggling syndicate was recently busted when a rather unbelievable way of smuggling gold was uncovered.- it came built into the woman’s undergarments.

Nabbed by the Lucknow police on Monday, a syndicate that was responsible for smuggling gold paste in the country by stuffing it in women’s undergarments was finally caught. The syndicate would work in a way of employing women couriers who would wear special undergarments that would help them smuggle gold in form of a paste. These undergarments were specifically designed for this purpose.

And one such courier was busted by the Lucknow police. The 39-year-old woman was caught red-handed with almost 1,259 grams of yellow paste, hidden in specially designed brassiere and underpants. It has been revealed that the woman originally from  Turkman gate, Delhi was travelling from Dubai and landed from flight no FZ 8325 on April 26, 2021.

Also Read : Woman Caught Trying To Smuggle 1,000 Cacti And Succulents Strapped To Her Body. Who Thinks Of These Ideas?

#Lucknow: Top gold smuggling syndicate, using specially designed bras and panties to smuggle gold paste in the country, has been busted. The syndicate had hired women couriers, wearing these special undergarments to smuggle gold in form of paste. pic.twitter.com/n4pY0nSnVt

Upon receiving special intel about the woman in a tip-off, she was intercepted at the airport when she was trying to leave. A customs source shared, “When the ladies staff searched her, yellow paste was recovered from the undergarments worn by the courier. The yellow paste, packed in black polythene and stitched in her brassiere was recovered.”

The woman was then presented in front of a Special Chief Judicial Magistrate (Customs) on April 27, wherein she was remanded to judicial custody. It has also been shared that this was the typical way the syndicate would work, smuggling gold from Dubai to India through different airports and women couriers. The source also revealed, “We are trying to ascertain the kingpin of this syndicate and also the number of women couriers engaged in smuggling activities.”

Guess it’s not just the movie directors that are creative in coming up with ways to pull of crimes like these on the screen, criminals off screen too, are getting way too innovative with their methods.

Also Read : Woman Faked Pregnancy Bump With Hollowed Out Watermelon To Smuggle Drugs. This Was Way Too Creative!