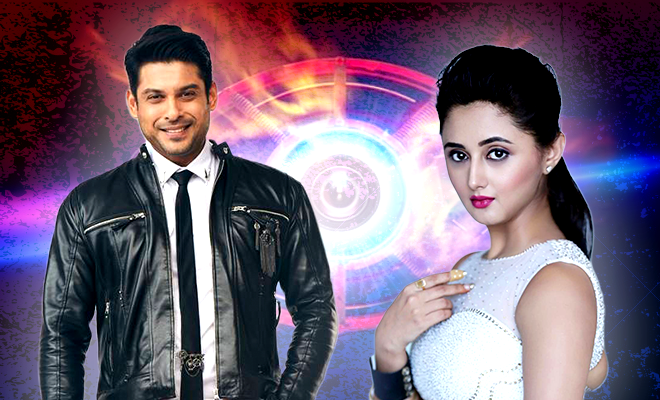 Sidharth Shukla And Rashmi Desai Were Forced To Kiss In A Task On Bigg Boss 13. Television Reality Shows Will Do Anything To Grab Eyeballs!

When the entertainment industry is growing manifold and new players are entering every other day – cut-throat competition because the audiences can consume only so much content. The older players try hard to stick around and up their game, because if they don’t, someone will steal their spot within no time. Yes, we as an audience do not have that amount of time and patience to invest in a dying show. But when we talk about upping your game, do we talk about going to recumbent levels and opt for cheap stints just to get some TRPs? We should because that’s what Bigg Boss 13 is all about.

If you’ve missed out on the latest episodes, let me tell you all about the shit that was smeared on our TV screens by one of the oldest sustaining reality shows in our country. Sidharth Shukla and Rashmi Desai were given a task to recreate their Dil Se Dil Tak chemistry in the Bigg Boss house. In that show, the duo played husband and wife and everybody knows that here, they are enemies of the highest order. So the show probably thought, this will garner a lot of TRPs and it probably did, but at what cost? In the task, the duo were seen romancing and were forced to participate in a lip-to-lip kiss but thankfully with a glass wall in between them.

After the task, Rashmi was seen feeling very awkward with the things that went down and was worried how it will be portrayed on the television. I understand her apprehension because these shows have some really skilled editors who leave no stone unturned to increase the tackiness of any situation and show things that are probably misleading and pulled entirely out of context.

Rashmi confided in Paras Chhabra about the incident and said, “There was a scene near the mirror, where Sidharth and I had to kiss the mirror from two sides. While I thought that they were going to kiss on the cheeks, we ended up sharing a lip-to-lip kiss.” He reassured her that things will be okay as this was a task and there was a glass barrier between them. She could have refused to do the cheap stint but that would have probably gotten her eliminated. This is exactly how such shows take undue advantage of the contestants and make them do shady things just for kicks. There’s nothing wrong with kissing on screen; we see it in the movies all the time. But the intent matters! If you’re just unnecessarily adding steamy scenes just to grab eyeballs, we are smart enough to see through it.

Salman Khan, hemming the show as the producer and host, doesn’t do any good to it either. He was the one who said this show isn’t for dignity and every episode seems to be proving just that. Bigg Boss tweeted about the scene with an equally shady caption, “#BiggBoss ke iss task se kya lagne wali hai @sidharth_shukla aur @TheRashamiDesai ke beech romance ki aag? Watch it tonight at 10:30 PM.” Wtf is that supposed to mean? We have a Splitsvilla which should just now classify itself as B grade TV show. Nach Baliye which was supposed to be all about dance lost its plot by focusing more on drama and bitterness among exes.

A few years ago, thanks to some media, entertainment journalism was going downhill and people were losing faith in us. In times of desperation to beat the cut-throat competition and escalate growth, a very well-reputed publication decided to stoop to extremely low levels. They captured a picture of Deepika Padukone, and made extremely nasty headlines about her cleavage. Well, that did garner them a lot of attention but not the positive kind. Ms Padukone openly spoke up against such shaming and instead of apologising the publication released an article defending themselves. “What’s equally hypocritical is that several media outlets have freely displayed Deepika’s cleavage even as they sounded all outraged on her behalf. Surely they could have reported the story without those pictures? Yes, the headline could have been better. But the world of online is very different from that of newspapers. It is chaotic and cluttered — and sensational headlines are far from uncommon,” they wrote.

Clearly, the media industry seems to have completely downgraded just to grab eyeballs and it’s not doing us any good.

Deepika Padukone Gets Listed In The Business of Fashion 500 List As The Only Indian Actress. And Damn, Are We Proud!(Opens in a new browser tab)

Raveena Tandon Says She Would’ve Taken The Pants Off A Lot Of People If Social Media Were There During The 90s. We Wish It Could Happen(Opens in a new browser tab)