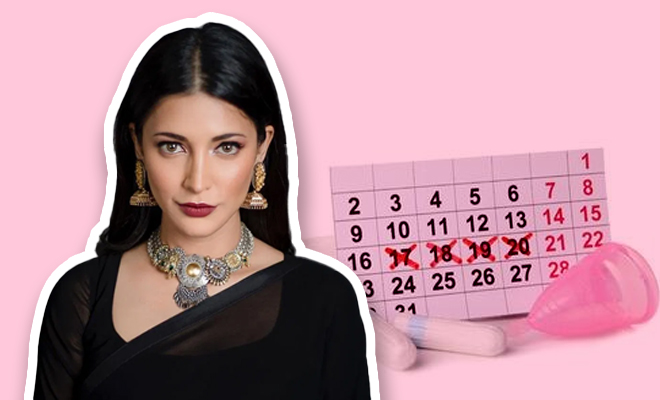 Menstruation is just another one of those perfectly normal and natural things that no one wants to talk about. It’s been treated like such a taboo in our country, that the thought of periods immediately brings feelings of disgust, embarrassment, and shame to the fore, despite it being just another essential process of the body. Strangely enough, while on one hand we want to brush all discussions about periods under the carpet, on the other hand we stigmatise it and isolate women during their time of the month. So we won’t talk about it, but we will certainly make it obvious when a woman has it. So when we’re not even ready to educate our young girls about menstruation, talking about things like PCOS is a long shot.

In a recent interview with HT Brunch, Shruti Haasan opened up about her experience with PCOS. “I had debilitating pain from my very first period,” she said. “I was diagnosed with endometriosis and dysmenorrhea. Sometimes, the pain would be so bad that I would have to come back from school midway. From the usual Crocin to stronger painkillers like Meftal Spas, Sapsmo-Proxyvon, I had tried everything. Nothing worked.”

Here are some easy foods swaps that can help you tame your symptoms of PCOS (Polycystic Ovary Syndrome). Know a few more that have worked for you? Do share with us your comments below! #periods #PCOS #periodproblems #periodpositive #health #menstruators #menstrupedia #diets pic.twitter.com/vK3rRxPbbI

“I was even put on homeopathy for a while. Finally, when I was around 18, I was prescribed birth control as a way to reduce the pain.”

Shruti also brought up the fact that periods and what women go through during those days is often underestimated. Period cramps are dismissed and taken lightly. “Sometimes, women dismiss the seriousness of their problems. Women as a sisterhood need to start talking among themselves!”

Using birth control pills as a remedy reduced the pain, but it came with side effects. “I was never overweight and was always very active. This weight gain really impacted me. At that point, I was at a music school in Los Angeles, and my agility was dropping and impacting my life. The pains the pills were supposed to reduce may have been a little less, but it was excruciating.”

Shruti said that people who make fun of PMSing should know that it’s a real thing. She talked about dealing with hormonal imbalances as well. “There are many times that my hormones have decided my emotions. So for me, this has been a mental process to be calmer, and instead of forcing myself to feel better, letting my body be.”

“In a country where sanitary pads are sold surreptitiously, it is important to start talking about periods!” Shruti further added. She also talked about how men need to be more aware about what women go through. “How does it matter what a person without a uterus thinks of my uterus? If they understand, that’s wonderful and an added advantage. In fact, I have always been blessed with very understanding partners, but sometimes even women dismiss the seriousness of it.

She’s absolutely right. As women, we also play a huge role in undermining our own battles. And as a society, we need to be having more discussions about periods. Menstruating becomes an unnecessarily difficult time for young girls simply because we refuse to talk about it. Opening up conversations will help us support and educate each other. People of all ages who menstruate will benefit greatly from having a safe atmosphere to share advice and resources.

Study Says Women Likely To Drink More Alcohol During Coronavirus Lockdown Than Men. Why Are We Not Surprised?