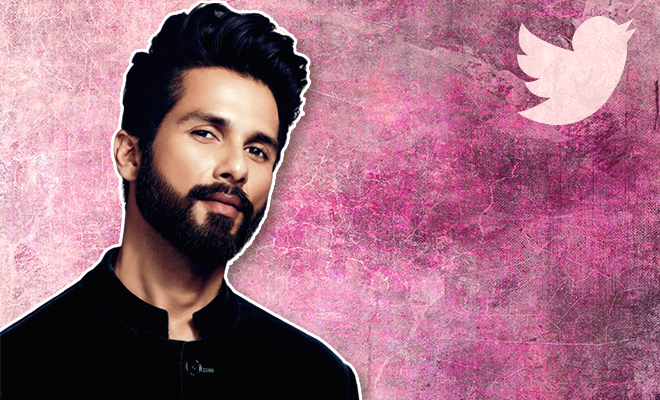 Shahid Kapoor Cracks ‘Woman Is The Boss Of The House’ Joke On Twitter And We Are Unimpressed.

One person’s funny can be another person’s offensive. Often a joke cracked ‘in good humour’ or atleast packaged as that ends up hurting sentiments. These are often ‘jokes’ cracked at a woman’s expense, about how they talk so much, or shop so much. They stopped being funny a while ago. As has been the case recently, when Kabir Singh actor Shahid Kapoor made a little joke on his twitter page over a question asked to him by a fellow netizen. His reply made us cringe more than it did make us laugh.

A fan approached the star and posed a question to him as relevant as ever in these times of coronavirus and its making all the stars be more social. This was during an AMA with Shahid Kapoor on his twitter page, he was asked, “21 din lockdown mei wife ko kaise khush rakhein (how to keep wife happy during the 21 day lockdown)?” And keeping in mind all the struggles all couples are facing in this 3 weeks house arrest, we think this was a valid question. Ideally though, everyone should be keeping their self happy, but let’s see what happened next. What didn’t quite sit right with most of us was how the actor responded.

Using the same old tropes, the Kabir Singh actor replied by saying, “Adarpoorvak Seva karo. Boss boss hota ha (Serve her with respect, the boss will be the boss),” we couldn’t help but shake our heads at how stereotypical his statement had made him sound.

Also Read : #SpreadPositivity: 5 Things You Can Learn In This 21 Day National Lockdown Period

Considering we live in the 21st century now, when women have actively come to the forefront, claiming roles and positions in the society that were once solely reserved for the men, to still rehash old jokes about how the woman holds the reins to a man and their marriage, doesn’t seem as comical as it seems unnecessary to be honest.

Gone are the times when people as woke and feminist as us would enjoy ourselves a little prejudiced santa-banta joke where the woman is type cast into a boss calling the shots. We live in times of equal power and equal responsibility, as we do in times of equal respect. And please can we do away with the woman is the boss rubbish? Because we know that Indian men don’t know how to treat their women right.

Guess Shahid Kapoor could’ve done a lot better if all he meant was to ensure a ‘happy wife, happy life’ philosophy.

Also Read : Bhumi Pednekar Has Been Doing AMAs And Fatima Sana Shaikh Is Sweeping Floors. Quarantine Is A Great Equaliser