Several Actresses Including Tillotama Shome Have Received A Hilarious Marriage Proposal From A “Virgin” Guy. We Have No Idea Why That’s His Badge Of Pride 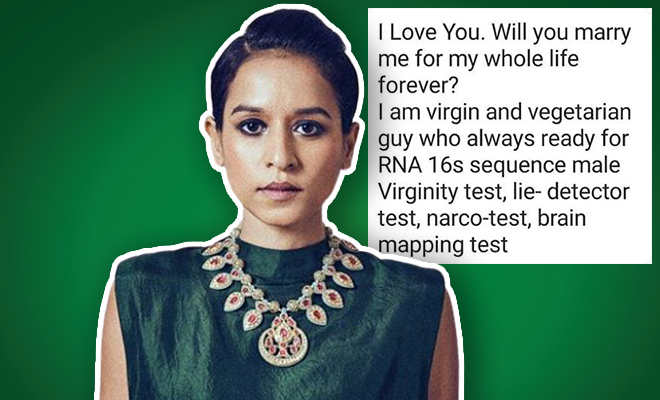 Years ago, when I didn’t have anything to do in life, I used to read those matrimonial ads in newspapers and trip over them. The audacity of people seeking “fair, slim, virgin” brides used to leave me in splits. Then there were those which went into specifications like they are discussing a mobile phone model and not an actual person. Long hair, tall, belonging to a particular caste, sub-caste, and native and I am like this is not a ‘customise your own tee’ service. Of course, there were men who took pride in their salary, height, and having “no past relation”.

Actress Tillotama Shome received a wedding proposal from one such guy, who wore his virginity like the Dothrakis wore their long braids of victory. She shared a screenshot of the proposal on Instagram and her followers had a good laugh. The guy claimed he was a virgin and vegetarian – like that makes him a top breed of men in India. However, with the way he presented himself, I really doubt he’s a virgin by choice.

He went on to say that he is willing to take “lie-detector test, narco-test, and brain mapping test.” And I am willing to walk on the moon if Jason Momoa is willing to marry me. This guy knows nobody is going to invest time, money, and energy on making him go through these tests. Plus, if someone had all those things, they would rather invest it in building a gold bathtub.

This post lightened up the mood and people started expressing their amusement in the comments. Writer actress Eisha Chopra said she also got the same proposal. I guess he should take those tests after all. Also, the narcos test is important too. I want to know what he is high on. Actress Shruti Seth jokingly asked, “How can you resist?” Theatre director and performer, Sheena Khalid poked fun at Shome and Kunal Ross, asking if isn’t that how he proposed her for marriage. To which Shome wittingly responded, “serious breach of confidentiality here.”

While it was taken in good spirit and we can all laugh it off, what is this ridiculousness? Seriously, virginity is nothing to be proud of and it absolutely doesn’t make you chaste. Especially not, if you’re going around doing such shady things. And what are the men who just randomly slide into your DMs with these nasty proposals and conversations? I really want to know how they have such delusional optimism that they think this can actually work. Imagine a story when a celebrity actually got married to a questionable man whose biggest achievement in his life is being un-bangable. Goes beyond me!

ALSO READ: Can We Just Talk About How Indian Men Simply Don’t Know To Flirt?

Tillotama Shome, whose debut was the famed Mira Nair’s Monsoon Wedding has worked in several critically acclaimed films such as Shanghai, Children of War, Budhia Singh – Born to Run, Hindi Medium and Kadvi Hawa. Her performance in Qissa: The Tale of a Lonely Ghost has been widely appreciated. Shome has also worked in Ekta Kapoor’s web-series Mentalhood.

ALSO READ: An Indian Unemployed Guy Is Looking For An Extremist And Patriotic Bride Who Is Also Fair And Rich. This Guy Is Going To Be Single For A Long Time 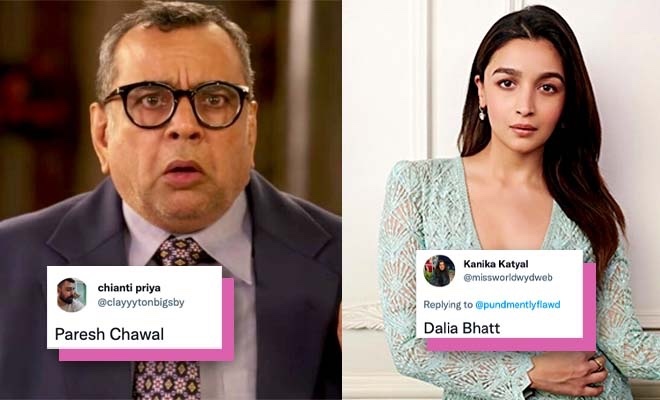 We stan the creativity!