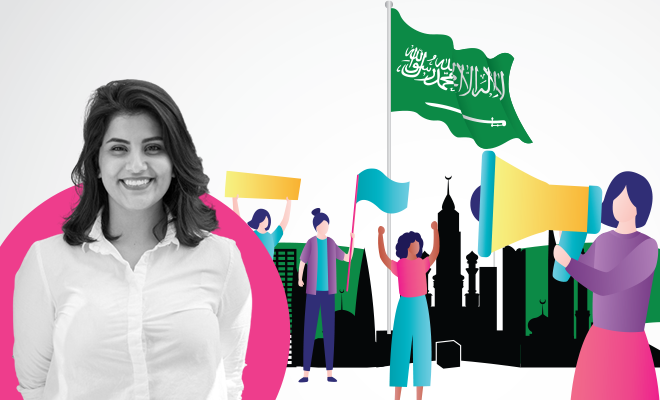 I’ve always been told that everything in life comes at a cost. That expensive sweater would come at a cost of 2 days of over-time at work, that toxic guy comes at the cost of your peace of mind, and across the globe, your freedom and voice as a woman comes at the cost of ticking several hundred people off. Just having to live life as a woman in world like ours often comes at the expense of our safety and survival. Especially in a place like Saudi Arabia, where the mere act of speaking up for women’s rights has landed women activists behind detention bars for days on end.

The world celebrated when Saudi women got the rights to drive in 2017. And now, over five women’s rights activists (one of whom fought to get women the right to drive) have been sent into pre-trial detention on charges that have been escalated to terrorism. Raising a voice against this injustice were seven European human rights ambassadors who criticised Saudi Arabia for the continued detention of at least five women’s rights activists, including Loujain al-Hathloul. Their cases have been referred to a special court for terrorism offenses.

Having been put under a pre-trial detention of over 900 days, Loujain was made to appear in a Saudi court on Wednesday. A statement from CNN shared that upon her appearance, her case was instead sent forward to the Specialized Criminal Court for terrorism and national security cases.  Why? because she dared fight for women’s rights in a predominantly male and patriarchal country like Saudi Arabia.

The family of Loujain al-Hathloul, a jailed Saudi women's rights defender believed by her relatives and advocacy organizations to be on hunger strike, has called on the G20 to demand that Saudi Arabia release the prominent activist. https://t.co/Y3D03P2EyB

Other activists including Samar Badawi’s case has also been referred to the special courts. Where as, the remaining three – Nassima al-Sada, Nouf Abdulaziz and Maya’a al-Zahrani continue to remain behind bars in detention. Human rights ambassadors for the UK, Netherlands, Germany, Sweden, Estonia, Luxembourg and Finland said in a statement that, “We remain deeply concerned by the continued detention of at least five women’s right activists in Saudi Arabia. We regret that the cases of Loujain Al-Hathloul and Samar Badawi have now been referred to the Special Criminal Court for terrorism and national security cases.”

The Biden Administration must reset our relationship with Saudi Arabia. America cannot be a credible human rights voice if we keep looking the other way. https://t.co/XqD90YgP94

The ambassadors further said, “Peaceful activism, and advocating for women’s rights is not a crime. Human rights defenders can be a strong partner for governments in addressing concerns within society.” Meanwhile, Hathloul argued in court about how she was tortured during her time in detention, as the Saudi authorities continue to repeatedly deny any claims of sexual abuse or physical torture.

While we know that Saudi Arabia is no place for a fair trial, more so for women, we hope that the pressure from ambassadors around the globe is enough  to make the Saudi authorities realise that even if they can’t see eye to eye with women, they can’t possibly take away human rights from these women, who only ever peacefully fought for their basic rights.