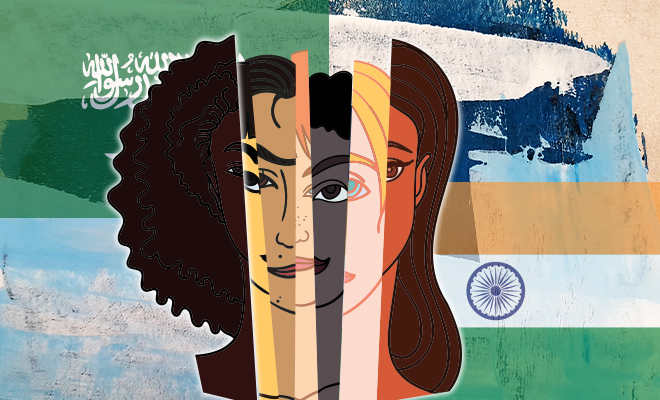 Saudi Arabia Lifts Its Mandate On Gender Segregated Entrances. At This Point, It’s Faring Better Than India When It Comes To Women

When I started writing this article, I wanted to draw parallels between how women are treated in India and the lack of freedom in Saudi Arabia. Except right now, this is such a terrible analogy to make because India has nothing to show for the respect it claims to have for its women. We claim to be progressive but the state of affairs is appalling. And now, it looks like even Saudi Arabia might be better than us and that’s really saying something.

The fact that Saudi Arabia has always been hailed as one of the most gender biased and segregated nations is not news, but this is changing faster than you can say ‘backward’ and that’s renewing our faith in the world. Having built its foundations and laws around curbing women of even basic rights, Saudi Arabia hitherto has been one of the world’s most strict and desensitised nations when it comes to its women. From withholding their right to show skin, to drive, to even travel or study without the consent of a legal male guardian, women had no more right to breathe in the country.

Also Read : It’s So Basic But Let’s Celebrate That Saudi Women Will Be Allowed To Travel Without The Permission Of A Male Guardian!

But today, as Saudi Arabia brings in another change of pushing back against its age old gender segregation practices, we are convinced that if a nation like Saudi Arabia can actually work towards bettering the state of women, any country can. The latest relaxation offered by the nation is on the need to maintain separate entrances for the both the sexes. It had been observed previously that the restaurants in Saudi Arabia required for all the families and children to enter through one entrance and the single men to enter through another, to keep up with the strict laws of segregating genders in public spaces. But now, under the rule of the Crown Prince Mohammad Bin Salman, the Ministry of Municipalities and Rural Affairs has announced on Twitter that this would no longer be a mandate.

Now allowing for the public to use common entrances, regardless of the gender, this is yet another milestone movement for the nation. In fact, this isn’t the first of it’s kind change either, for ever since the Crown Prince Mohammad bin Salman has taken the reigns, he has slowly yet steadily been introducing change.

This is a sea change in a country where previously women were put in jail for being behind the wheel, so the lifting the ban on women driving was a big change that came in last year. Followed by the nation granting access to women to pursue their education, or access government or health services and travel without the consent of a legal male guardian.

Saudi Arabia has also observed a relaxation on women now being allowed to open their own businesses, which earlier not been entertained and even began to let them sit in the stands of public stadiums to watch sports tournaments live. From little steps to the big ones, every effort being made in the direction to make Saudi Arabia into a more gender-neutral nation has come through remarkably, and despite their being some backlash from the conservatives, it seems like change is finally here for women of the nation. Which is more than we can say for India.

If only, we could learn a thing or two about not just preaching about change but also making visible efforts to welcome it, we could too be on our way to becoming a reformed nation.

Also Read : Finally, Saudi Women Are In The Driver’s Seat!