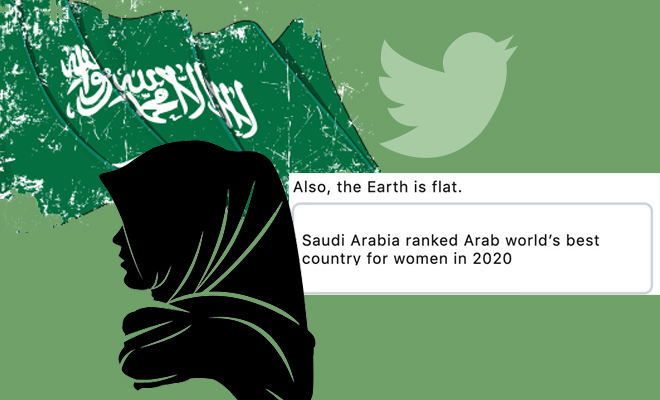 Saudi Arabia Has Been Ranked The Best Country For Women In The Middle East. Is This Some Kind Of Bad Joke?

I thoroughly enjoy the English language. From similes to alliteration, I am thorough with all it has to offer, but if I were to put my finger on one of my least favourite literary techniques, it would have to be ‘irony’. While it may be one of the most interesting tools inherent to the language, one you could always play around with and have fun considering it is the perfect way to drop some sarcastic truth bombs.

And nowhere is irony being celebrated as much as this baffling piece of news where Saudi Arabia has been ranked, and I am not making this up, ‘The best country in the Middle East for women.’ As per a report released by a New York-based online business magazine called CEO World, Saudi Arabia was ranked 89th worldwide, but sadly was placed at the first place in the middle east in terms of being best for women. Who did the research for this piece? What is going on? And even as we speculate, the full title here should be ‘best at being the worst for women’.

The ranking marks Sweden as the best country for women safety, with the Central African Republic as the last, and Saudi Arabia as the best in all of Middle East. You see, it’s not like we have a personal bone to pick with the country, but when you are told that the ranking was based on a lot of factors like gender equality, the percentage of legislative seats held by women, sense of security, income equality, human rights, women’s empowerment, inclusion in society, education and paid work, to still see Saudi Arabia emerge on the top feels like the magazine and its writers may be smoking some very potent stuff.

And we say this because it is the same country where female rappers are banned for merely talking about the power and beauty of women, or where women are harassed and sexually abused at concerts by men without shame or fear of consequence, and where women journalists are executed for speaking their minds. With years and years of regressive restrictions put on women, from the way the dress to how they interact, the only way Saudi Arabia could be the best for women, was if there were no women living in the country.

What next?
China ranked first in animal rights!!

Last country in the world to allow women to drive

Because in S. Arabia you cannot distinguish whether it's a woman or man in burqa.

If that wasn’t enough, let’s not also forget that Saudi Arabia only granted women the right to drive in 2017, with licenses coming out in 2018, making it the LAST country in the world to have granted this basic right to women. Clearly these facts weren’t taken into account, or maybe they mixed up the word ‘safe’ with ‘suppressed.’

And we are not alone into thinking this, because turns out this consensus did not sit right with a lot of other people too, who were quick to drop down their two cents on twitter and remind people, that this is far from reality and considering we are saying this during the middle of an unbelievable year, it means something.

Also Read : A Female Rapper Was Arrested In Saudi Arabia For Singing About Women, Their Beauty And Power. So Threatened By A Woman?