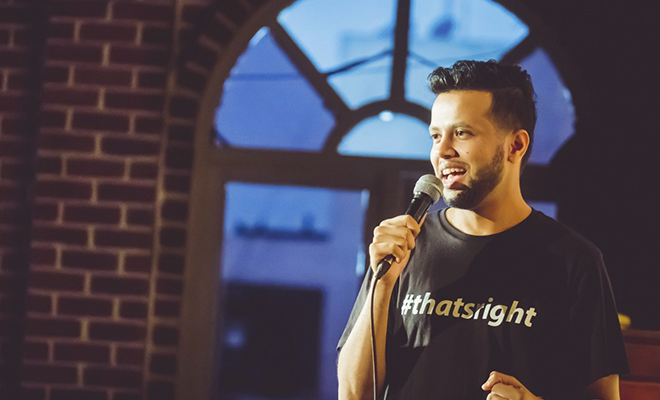 #MCM: All Sapan Verma Is Trying To Do Is Make You Laugh And Not Go To Jail

While we, the #HauteSquad, love all things girlie and are champions for strong, inspiring women, we also love our boys. And to show them some of this love, we introduce our new series #MCM — Man Crush of the Month. Every month, we’ll feature a man who’s doing something cool and making us proud — and looking good while doing it. Stay tuned for some serious *heart-eyed emojis*.

It’s the month of April and, inevitably, there’s a certain kind of humour in the air. You know the saying “find a man who can make you laugh”, right? Well, we have found the one — Sapan Verma.

Not only does he know how to tickle our funny bone but, his infectious smile has us turning into mush every single time. In fact, if you’re ever having a bad day, we’d suggest you binge-watch his stand-up acts and experience some intelligent comedy at it’s finest.

Read our little tête-à- tête with this month’s man crush and don’t blame us if you find yourself heading over to his YouTube channel soon after.

1.What’s your journey been like so far? When did you decide that this is what you want to do for the rest of your life?

It’s been like any romantic relationship, in the sense that most times I love it, but there are days when I want to stab myself. But I stop whining when I realise that I’m fortunate enough to do what I like, and make money off of it.

2016 was particularly amazing because I toured my solo show, Obsessive Comedic Disorder, and I opened for Coldplay and Jay-Z at the Global Citizen Festival.

Every time I get on stage, I feel like this is what I want to do for the rest of my life. It’s the best job in the world – you tell jokes, people laugh, money gets credited into your account. The performing part never feels like a job. The writing part is intense and fucking tough, though.

2. What were you doing before you were making people laugh?

Getting treated like a garbage truck as a scriptwriter for TV and award shows. And getting treated like a BMC dumping ground as a copywriter at a small agency before that. I worked and interned at seven jobs before trying comedy, and each of them gave me a different reason to quit.

3. Tell us more about your equation with East India Comedy.

EIC was formed because we wanted to save tax money. But we never ended up making enough money collectively for us to save. Jokes apart, though, EIC is a comedy collective where we all come together to write/perform/create all kinds of comedy-related content.

I love it because it’s a place that satisfies all my creative urges as I get to write, direct, act, produce, and do anything and everything! My favourite part about the office, though, is ordering groceries every month and filling up the fridge with munchies and alcohol.

4. Your favourite sketch/show so far? A moment that you want to relive again, if given a chance?

Wrecking God was my favourite thing so far. It’s an edgy song written in a subtle way to ensure nobody kills us. Plus, it was a crowdsourced video shot entirely on an iPhone. So I loved the process of making that video.

Show wise, I loved performing The Modi Song and The Trump Song at our EIC All Stars tour earlier this year. I’m a wannabe singer with horrible musical talents.

5. What are the major obstacles that you face while doing or researching for your shows?

The whole process of writing a joke is quite tedious. You have an opinion or an idea, you write it for days, then you go try it at an open mic. Most times, about 50-60% of it works, so you rewrite it and make more drafts, and then try again. This goes on for weeks until you’re satisfied with it, which rarely ever happens.

Sometimes if your joke is research based, it takes a lot of time. I had written this bit about Obsessive Compulsive Disorder, which took almost 2 years to write. I had to read up a lot, speak to a lot of therapists, and understand what a person with OCD goes through. I wanted to make sure what I’m saying is factually correct.

6. The best compliment that you have received or any crazy thing that a fan has done for you?

I did a show for the Indian Navy in Vizag once where a submariner walked up to me after the show and said, “I spend 200 days underwater with no phone or newspaper. When I go back, I will narrate all your jokes and stories to my friends and they will also be entertained thanks to you.” That felt really special.

I made an EIC Outrage video about student suicides, and I got more than a thousand mails from students all across the country. Few of them even told me that they were contemplating suicide, but that video made them changed their mind. That one particular line was the most heartening as well as the scariest thing I’ve heard. I didn’t know that comedy videos could make people do that!

7. Who is your inspiration? What motivates to give you your best?

Nobody. I don’t have an idol as such. I think insecurity and fear of not being successful motivates me.

8.If not a comedian, what would you be?

Is there a job that lets you binge-watch TV shows and movies, and pays you in return? I’d be the market leader in it.

God, this is deep stuff! I don’t have an end goal, I just want to be creatively happy with what I do. I want to be able to create things without the fear of making money or going to jail. That looks like the ultimate dream for every artist in India right now – to do your shit and not go to jail.

10. What are your future plans?

Thanks for the question, dad. Since I just finished my special, I’m back to writing new material and testing it at open mics. Other plans for the year include making more YouTube videos, focussing more on my personal life, and ensuring that I don’t go to jail.

11. Any tips for budding comedians?

Watch a lot of comedy, both online and live. Write like a maniac, every day. Be original. It’s a tough scene and it takes almost a year to even make a dent, so don’t quit your day job or education for it just yet. Also, like, share, comment, and subscribe to my YouTube channel and buy tickets to all my shows.