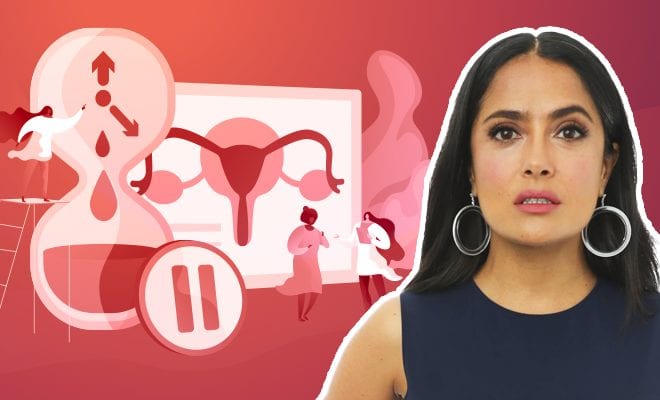 When I first got my period, I was obviously overwhelmed because I hadn’t been prepared for it. I still remember how it all went down. My mother was away at work and so I told my father first. And he, clueless as all men are in a situation like this, ran out to get me pads and tried his best to console me. It was an adorable father-daughter bonding moment until my grandmother yelled at me for telling him in the first place. I was told to keep such things to myself and not talk about them, especially to my father. That was my first encounter with this ridiculous stigma that surrounds menstruation. Since then, I’ve come face to face with it countless times. But it was only until recently that I learned that menopause is equally stigmatized, if not more. There is such little awareness about menopause that most men aren’t even aware of such a concept. Today though, we are talking about Salma Hayek who is breaking down stereotypes and doing everything she can to spread awareness about menopause.

I would say that everybody, regardless of gender, needs period education but I know I would be wasting my time. The myths and stigma that surround the concepts of menstruation and menopause can’t be done away with so easily. The reason for that is largely internalized patriarchy but that’s a whole different story.

Salma Hayek revealed it was her idea to make her character menopausal in the film #TheHitmansWifesBodyguard | #Menopause #womenshealthhttps://t.co/nvDtZSQTrT

Salma Hayek told The Sunday Times Style that people assume that once a woman enters menopause, she stops being sexy. It’s very true. Women are treated like disposables that have an expiration date. She said, “People have the wrong assumption that [menopause] is when a woman stops being sexy.”

In this interview, she said that it was very important to her that her character in The Hitman’s Wife’s Bodyguard was menopausal. Salma emphasized that it’s extremely unfair that an ‘expiration date’ is put on women on the basis of their ability to procreate. She said, “It should not define us as women. For so long the concept of beauty in a woman was leaning completely to youth, and I think, f**k that s**t!”

We love that someone finally spoke up about it. Hopefully, more celebrities will use their fame and influence to spread awareness about concepts like menopause. It might help decrease the stigma.

These Indian Festivals Celebrate Menstruation Instead Of Stigmatising It