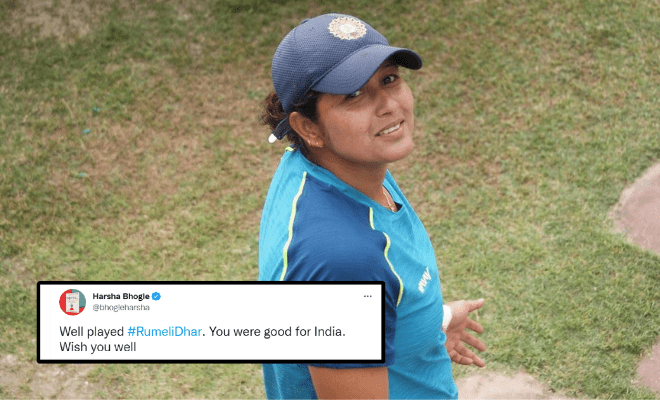 Also Read: ‘Shabaash Mithu’ Trailer Is All About Mithali Raj’s Rise In A ‘Gentleman’s Game’ As She Establishes The Women’s Cricket Team’s Identity

Rumeli Dhar took to Instagram and recalled that her 23-year cricket career began in Shyamnagar, in West Bengal and has ended as she announced her retirement from all forms of cricket. She then added her journey has been long and full of highs and lows and that the highlight of her career was representing the Indian Women’s Cricket Team, playing in the 2005 World Cup final and leading the Women in Blue. She said that her career was impaired by a series of injuries but I always overcame these setbacks. She then showed her gratefulness for her family, the BCCI, her friends, and the teams she represented which are Bengal, Railways, Air India, Delhi, Rajasthan, and Assam for believing in her abilities and giving her the opportunity to play for them. She further added that they paved the way for her to join the India team.

Well played #RumeliDhar. You were good for India. Wish you well

Dhar then says that each match in her long career has taught her something that will help her in my second innings. She details that her journey as a cricketer will come to an end but she has promised her followers to stay involved with cricket and help nurture young talent in the country, attempting to give back to the game in any way possible. She then thanked everyone who has supported her through all of her ups and downs and everyone who has loved her, her game, pushed her when she needed it the most, cheered her at her lowest, laughed with her, and scolded her when she needed it the most. She said that she owes everything she is today to each and every one of her supporters. Dhar finally said that she is at a loss for words to express how she feels. And that she wants to thank everyone for being there for her and showering her with love.