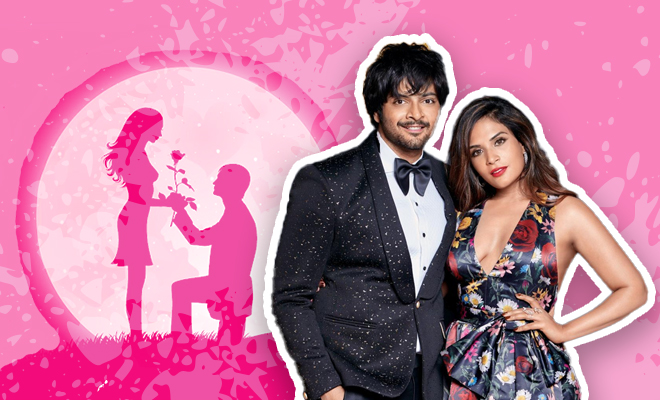 When we entered this year, all of us had several plans and goals we wanted to fulfil. Some of us decided to travel more, finally join that gym or dance class and maybe even get married. But here we are, struck by a pandemic and on an indefinite pause. None of us saw this coming. It’s not like every year we achieve the goals we had but this time it’s not our fault. As 2020 got cancelled, several couples’ weddings got postponed. Among those couples are our favourite jodi Richa Chadha and Ali Fazal.

We had been waiting with bated breath for them to get married, which was supposed to happen in April, this year. I mean, not like we were going to be invited or something but I don’t know, they just seem like such an adorable couple, that it would be nice to partake in the festivities. They are a perfect balance of romance and comfort and their social media posts make me want to drop a dozen hearts in the comments.

As reported by Hindustan Times, the couple announced that their wedding is likely to be in the second half of 2020. “Given the current scenario and the unfortunate turn of events owing to the COVID-19 pandemic globally, Ali Fazal and Richa Chadha have decided to postpone their wedding functions to the later half of 2020 tentatively. They wish for everyone to be healthy and safe and at no cost would want their friends, families and well-wishers to be affected,” their statement says. While we don’t know how things will go with the pandemic and how many guests they will be able to invite for their wedding, it’s still exciting!

Their love story is a beautiful one and makes us believe in happy endings again. Richa told a magazine how she first said ‘I love you’ and it’s really cute! “We were at my house watching the 1992 biographical comedy, Chaplin. I was happy to see him enjoy the movie and grateful to have found someone with similar tastes. That is when I said, ‘This is really sweet, I love you’, to him,” she revealed. However, it seems like Ali Fazal took three months to say it back. Damn! What matters though is that he did cross that bridge.

Ali made up for the late ‘I love you’ by planning a really romantic proposal dinner for Richa. “He had planned a romantic dinner on a small, secluded island in the Maldives. I thought it was for my birthday. I didn’t suspect a thing. We had finished eating and were sipping champagne when Ali, being his spontaneous self, asked me to marry him,” she revealed.

She further added how he didn’t go down on his knee or even have a ring. But what he did after that was the most hilarious thing! “After that, he took a 10- minute long nap on the sand,” Richa revealed. “I think it was because he may have been stressed about the proposal,” she continued. This is so cute. Their bond goes beyond textbook romance and we love that about them.

In fact, Ali Fazal says clumsiness was one of the many reasons he loves Richa. “She thinks I fell in love with her only because of her clumsiness and it surely is one of the reasons. She is as clumsy as it gets,” he said. “If she is eating, there will be glasses spilling, food will be all over the place, and cutlery will definitely fall,” Ali shared.

ALSO READ: Richa Chadha And Ali Faizal’s Relationship is All Things Adorable. They Are Giving Us Major Couple Goals

Sharing her most embarrassing moment of clumsiness, Fazal said, “Her most embarrassing clumsy moment was in Venice. It was at a fine dining event and Judi Dench was sitting at the next table. Suddenly a bean went flying over – of course, it was from Richa’s plate. She calls it her Pretty Woman moment.”

It’s beautiful how they share such a deep bond that goes beyond having to be prim and proper. It’s how they are themselves with each other is what makes their love story all the more refreshing.

ALSO READ: Richa Chadha And Ali Faizal Are Proof That You Don’t Need A Marriage Certificate To Show Commitment