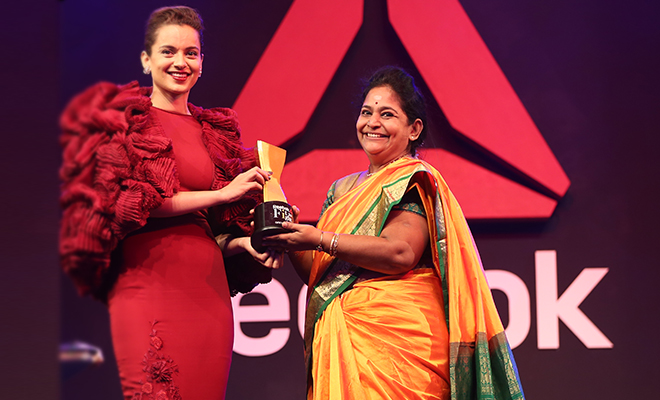 Reebok’s ongoing social campaign #GirlsFight, led by Bollywood diva Kangana Ranaut, made a bold statement that got everyone’s attention. Inspiring women to break boundaries, and unleash their full potential, the campaign challenged girls to fight stereotypes and achieve their dreams.

But that’s not all. Reebok took it a step further with the Reebok Fit To Fight Awards 2017, celebrating 12 beautiful, courageous, independent women who dared to fight back against stereotypes and obstacles, and achieve their dreams.

The second edition of the awards night was a major hit, where soul-touching stories were shared.

Divided into 3 categories, the stories of these 12 women are sure to find a cosy space in your heart. Scroll down to be inspired!

After working for multinationals, Chhavi decided she wanted to give back to society, and she found an interesting way to do that. She is now the sarpanch of a village named Soda, and is trying to modernise villages, one step at a time. Interestingly, she is the first and the youngest woman sarpanch in India with an MBA degree. Kudos to this amazing woman!

It is said that ‘mothers’ are God’s representatives on earth, and this is very, very true for Geetha Sridhar. She works effortlessly for kids suffering with cancer, and takes care of around 28 children as her own. We could all take notes on how to be selfless from Geetu Ma.

With a decade of experience in her kitty, Gloria’s NGO is India’s largest youth volunteer network. Her second non-profit organisation called ‘Guardians Of Dreams’ aims to transform the quality of childcare provided by children’s homes across the country.

The phrase ‘where there is a will, there is a way’ has been taken to another level by Chandni. She started life by performing on the streets with her father, but after his death, fate forced her to become a ragpicker. But thanks to her indomitable spirit, Chandni is now the editor of a newspaper called ‘Balaknama’ and is also the founder of an NGO named ‘Voice Of Slum’. As the name suggests it works for the welfare of slum children.

Also known as India’s Wonder Woman, she is our country’s first commando trainer. Having trained for over 18 years, she regularly serves and trains our armed forces.

This Delhi girl has taken the schooling system by storm, building a healthier tomorrow for our kids. Her NGO, Health Set Go ensures that health standards are maintained in schools across India.

The next time you think you’re too old to do something, take notes from Meenakshi Raghavan. This baller is all of 74 and sword fights like a true warrior in a sari!

Coming from a humble background with extremely limited resources, Kalaiselvi is a marathon runner who knew from the very beginning that she had to work hard to achieve her dreams, and boy was she willing to do that.

Known as the ‘Internet Didi’ of her village, she educated herself with the use of the Internet, and used it to bring about positive change in her community. Despite facing personal hardships, she remains determined to put a stop to wrongdoings, and voice her opinions.

She was initially told not to opt for science as her subject of preference in high school because she was blind. Nevertheless, Vidhya took it on as a challenge and topped her university. Now she works towards empowering other visually impaired students, and gives them the hope they need.

Masaba is one of the most well-known fashion designers in our country, and has time and again proven that she is a real #GirlBoss. Standing up to trolls, she silenced those who called her the ‘bastard child’ of former West Indies cricketer, Viv Richards and actress, Neena Gupta.

She has entertained Mumbai for years, and recently wrote a rap about the pathetic conditions of our roads, demanding answers from the BMC regarding the potholes in our city. Malishka received massive support from her listeners, and has become quite the social rage.

There were a few special awards that were given in association with the Kailash Satyarthi Foundation. Nobel Peace Prize winner Kailash Satyarthi has worked tirelessly towards building a free, healthy and safe future for children. At the Reebok Fit to Fight Awards 2017, Reebok awarded 5 young women from his foundation who’ve endured various trials and hardships.

All of 13 years, Tara has been fighting for children’s rights for the last 5 years. Today, no one in her community in the Nimdi village in Alwar, Rajasthan practises child labour, and with her hard work, she has managed to enrol 7 students in school.

This class eleven student has successfully managed to eradicate the practice of child marriage and the purdah system from her village in Rajasthan, Hinsla. She was recognised for her fantastic work by the Swedish Council, who gave her the chance to be on the jury of the World’s Children’s Prize. Payal went to Sweden, and inspired more children like her.

13-year-old Aarti has been fighting illiteracy, child labour, casteism and child marriage too! In 2015, seeing that every third child in the village was not in school, Aarti contested the Bal Panchayat elections and became an elected member in order to make a difference. Along with other children, she organised rallies, door-to-door campaigns, and personal meetings with parents. Now, 96 children are in school thanks to her efforts.

Coming from a poor family in Rajasthan didn’t stop Lalita from fighting for what is right. On the occasion of Makar Sankranti, she initiated and participated in “communal lunch” where she along with other Bal Panchayat members went door to door to the family of all castes, had lunch with them, and encouraged the entire community to join hands and work together for the common good.

This 17-year-old has been an active member of the Bal Panchayat in Saleta Village in Rajasthan. Today, thanks to her efforts, all children in her village go to school and the number of teachers have been increased too. Though she was not at the awards ceremony, her efforts have surely been recognised by Reebok.

What is also worth noting is Reebok’s association with the government’s ‘Beti Bachao Beti Padhao’ scheme to empower the girl child. Hon’ble Minister of State Dr. Virendra Kumar, Ministry of Women & Child Development was the Guest of Honour at the awards night, where he highlighted the schemes undertaken by the Ministry of Women and Child Development for girl child education.

All in all, the Reebok Fit to Fight Awards 2017 acknowledged the courage and conviction of many deserving women, and gave them a platform for their own #FitToFight stories to come alive. Their stories of perseverance, bravery, struggle and success are worth celebrating! So why not do just that? Share this article with your friends and give them the inspiration they need!