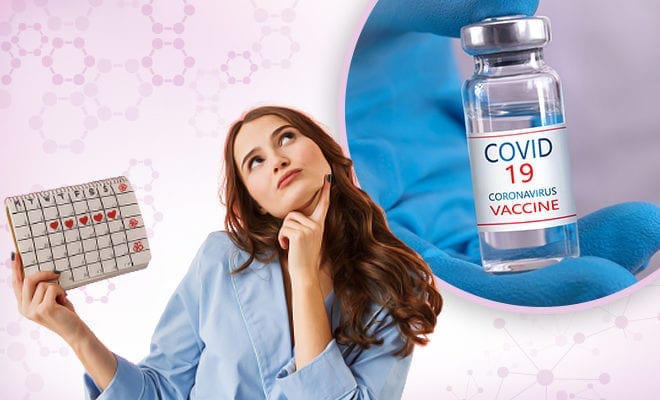 ‘Don’t enter the kitchen’, ‘Don’t sleep on the bed’, ‘Don’t fetch water from the well’, ‘Don’t offer prayers to god’, ‘Don’t touch the holy book’, these are all just a few of the taboos surrounding the concept of menstruation for women, all of which aren’t just demeaning but also don’t make any sense. And one of the latest additions to this list of menstruation myths has been where it is being said that women should not take the Covid-19 vaccine five days before and after their menstrual cycle.

The post has gone viral and is being widely shared about how women shouldn’t be taking the Covid-19 vaccine during their menstrual cycle was recently squashed by doctors and activists and for good reason.

As opposed to what the poster suggested, most people quashed any such rumour that suggested menstruating women to steer clear of the vaccine. Calling the poster and the news ‘fake‘, Press Information Bureau (PIB), that is known to run extensive fact checks for the government, tweeted, “#Fake post circulating on social media claims that women should not take #Covid19Vaccine 5 days before and after their menstrual cycle. Don’t fall for rumours! All people above 18 should get vaccinated after May 1.”

Also Read : This Village In Maharashtra Has Elected An All-Woman Panchayat. It’s Now Cleaner, Inclusive And Menstruation Is No Longer Taboo

#Fake post circulating on social media claims that women should not take #COVID19Vaccine 5 days before and after their menstrual cycle.

All people above 18 should get vaccinated after May 1. Registration starts on April 28 on https://t.co/61Oox5pH7x pic.twitter.com/JMxoxnEFsy

However, reports from the US have surfaced where it is being observed that women’s periods have changed after they got their coronavirus vaccines.  Alice Lu-Culligan and Randi Hutter Epstein at Yale School of Medicine told the New York Times that, “so far, there’s no data linking getting vaccinated to changes in menstruation”.

They further said, “Even if there is a connection, one unusual period is no cause for alarm.” Meanwhile, a Mumbai-based gynaecologist also clarified any rumors around it as she said, “A lot of patients messaging me asking if it’s safe/effective to take the vaccine during their period. Some silly WhatsApp rumour has spooked everyone. Your period has no effect on the vaccine efficacy. Take it as soon as you can. Spread the word, please.”

It is imperative the people are informed about this because it’s high time the society stops spinning taboos and myths around menstruating women.

Also Read : “Menstruation Has Been Stigmatised In Our Society”: Gujarat HC. Court Proposes Law To Allow Women Access To All Places During Periods