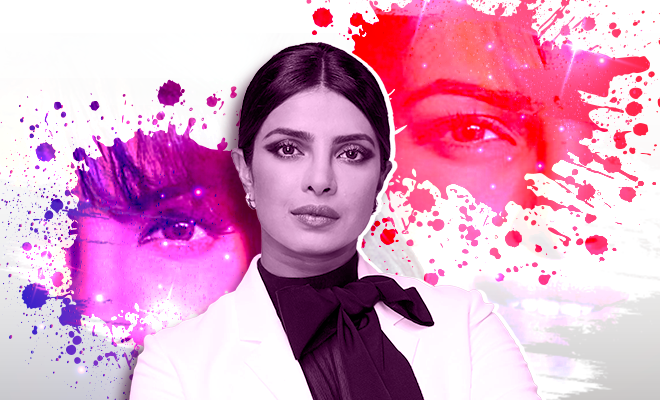 Priyanka Chopra Says No One Was Willing To Tell Women’s Stories, So Women Became Producers. This Needs To Be Heard

When I was a kid, going to the movies was my favourite thing to do. Though we never went as much, every Friday I would bring the newspaper to my mother, open the show timings (Yeah, we didn’t have apps back then) and make puppy dog eyes. It didn’t work every time, but when we went to the theater, I would get all hyper and excited (don’t judge). But as I grew up and went back and watched the same movies I loved so much as a kid, I really saw the movie and all its not-so-on-the-face details. For example, the “hero” was always the primary protagonist. He would get all the screen time and most of the footage. It was his face right in the center of the poster while all the other cast members including the “heroine” surrounded him. I also realized a lot of subtle sexism that took place that no one back then was equipped enough to understand.

This was the scene a few years ago. Now, I don’t know if you have noticed but even commercial movies have stopped doing all that. There are no more sexist slurs (most of the time) and there are no long character differences between “good” women who were all along portrayed as being timid and obedient and “bad” women who were always portrayed as rowdy and too forward. Okay, just to clarify this is the case with most movies.

The bigger, no so subtle changes came in the form of “women-oriented movies”. A movie that is either about women or has a strong woman lead. The last few years have seen some amazing movies with a woman spearheading the whole show. The only problem? There aren’t as many of these kinds of movies as we would want. Maybe that is because people aren’t as receptive to female-centric movies as they are to commercial movies and that is why they don’t get the correct funding. That has led to a lot of actresses producing movies that have a story that they want to tell. The biggest example of this is Priyanka Chopra, who began picking and choosing movies with strong female characters when no actress in Bollywood wanted to dip their toes into that pool.

In a recent interview, PeeCee was asked whether it is true that women are increasingly producing movies with stories that no one is willing to tell. She said, “Yes! You start producing films when you want to tell stories no one else is making,” She further added, “You think, ‘If you’re not going to give me the kind of films I want to do, I’ll just make it myself.’ In America, that’s what I’m doing. It’s a testament not just to the actor but also the audience who are becoming gender blind. My life’s dream is that we stop referring to films as ‘female centric’, actors as ‘female actors’, directors as ‘female directors’, or athletes as ‘female athletes’. It’s just athlete, director, actor!”

It is brilliant that women have stopped trying to tell their stories through other, more ignorant methods. Now actresses with a story are going ahead, investing in the story, acting in the movie and not caring about what other people are saying. And ever since Priyanka has shifted base that is exactly what she is doing in Hollywood as well. This is exactly what is pushing the movement forward and getting people to appreciate stories of inspiring women.

Also Read: Vidya Balan Says Society Tends To Finds Flaws In Women So That They Do Not Fly High. She’s So Right!

Another thing that we found super interesting about what our Desi Girl said was the fact that we need to stop putting a box around professional women. We need to stop describing them as “female” because that is separating them from the others. It is not like we describe an actor as a “male actor” so why do we need to describe an actress as a “female actor”? I don’t think these terms are very inclusive. This is great food for thought.

Right now, the only thing we can really do is move along the path we are going on. Whether it means that women need to produce more films, or we need to take to social media to drill this idea into people’s heads, we have to do it. After all, men have had their fair share of fun for too long.

10 Women-Centric Movies And Shows We Absolutely Loved In 2019