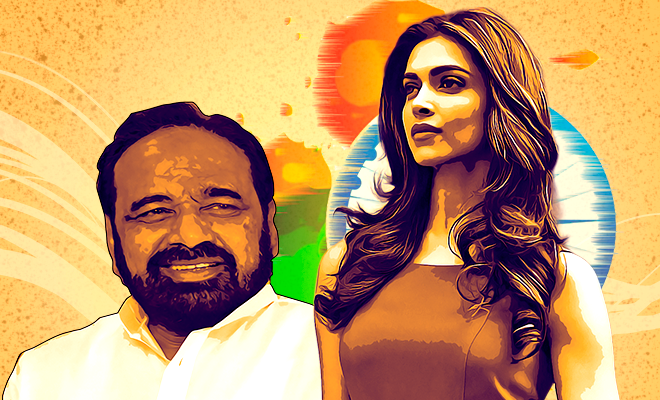 Politician Gopal Bhargava Said Actresses Should ‘Stay In Mumbai And Dance’. Maybe If You Did Your Job, They Would

Here is the problem with our politicians, they don’t know how to respect women. Actually, that’s a problem with all our men. We are sick of these men saying utterly baseless and frankly offensive things about women. But when men act like complete assholes and try to put women in a corner, we want to cut them to size and additionally, maybe punch them in the face.

Allow me to give you a little context why I am suddenly hating on our “amazing” politicians. Not that I have ever found a reason to like them but this guy makes me irrationally angry. Ex-Madhya Pradesh minister, Gopal Bhargava just dropped a controversial remark about Deepika Padukone’s JNU visit after the attack there. Though he didn’t name her, it was very clear when he said “Heroine ko toh apna dance karna chahiye Mumbai mein baith ke. JNU mein kyun jana chahiye tha usko, mere samajh nahi aa raha. Is prakar ke darjano log ho gaye hain jo activist, artist kehlate hain,” (A heroine should stay in Mumbai and dance, what was the need for her to go to JNU. Dozens of such people have emerged who are called activists and artists, but actually play politics at places meant only for studying. Varsity campuses should be meant for studies only and not for politics,”)

So, in an attempt of getting him to understand why what Deepika did was an amazing gesture, we have written him an open letter. Check it out:

Also Read: Deepika Padukone Turned Up At The JNU Protests. Here’s Why We Think It Wasn’t To Garner Publicity For Chhapaak

I really want to know what you were thinking when you said these things because you must know that what you said was deeply sexist. At least Deepika Padukone turned up, at least she has a spine and that’s more than we can say for the likes of you. .Why do you sound so threatened by her gesture?

If “heroines” are only supposed to “stay in Mumbai and dance” who is supposed to go to these protests and stand with those students and teachers? You are, that is literally your job as a representative of the people! Aren’t you supposed to stay in your seat and actually do something?

Also Read: Swara Bhasker, Bhumi Pednekar And Others Applaud Deepika Padukone For Turning Up At The JNU Protests. You Go Girl

You are right when you say hundreds of people have emerged as self-proclaimed activists and do you know why that is? It is because politicians not unlike yourself aren’t taking any action. You sit back while the whole country was engulfed in violent protests. You didn’t move a muscle to do anything. You’ve failed to be active or even play a role in the politics, so yeah citizens have to become activists. You know you said that a college is supposed to be a place for studying and not for playing politics? Well, please tell me how you want to describe what happened at JNU. Was that just merely “studying” or was that an act of pure, raging anarchy?

While you sit here and fail your constituency, your people and most spectacularly, your women, someone’s got to the do the job and the students and citizens of the country are doing exactly that.

Rangoli Chandel Slams Deepika Padukone For Showing Up At The JNU Protests By Calling It A Promotional Gig. Come On Rangoli!