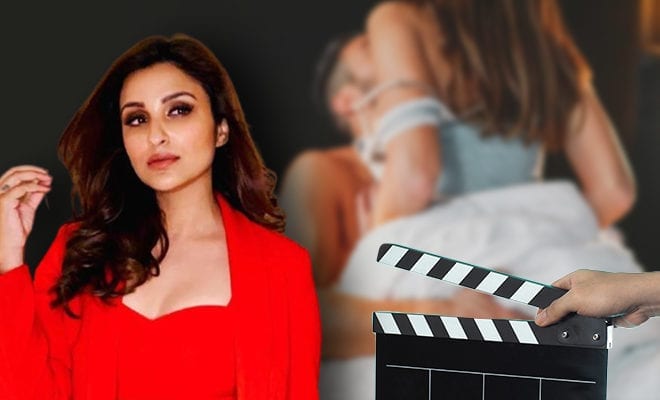 The worth of an actor is usually judged by how convincing his or her acting on the screen is. Whether or not we believe in the character that they were playing on the screen is a true testament of their acting skills. Be it a fighting sequence, a long intense monologue or even a love-making scene, what makes it great is the commitment to the scene. And while it may not be that big a problem other times, it can be one during intimate and love making scenes.

With every next movie becoming more raw and bolder than the previous one, Bollywood has come a long way from shoving flowers in the camera as a way to symbolize love making. Now, directors are exploring all facets that there are to shooting such scenes, and opening up about what goes off the screen when that happens was actress Parineeti Chopra.

Having given quite a few hits recently in movies like Saina, Sandeep Aur Pinky Faraar and The Girl On The Train, Parineeti Chopra seems to finally be in a good space in terms of her professional life at the moment. While in Turkey right now, the actress made time for a tete-a-tete with a leading daily where she spoke candidly about her acting career and what goes behind the camera.

Touching upon quite a few topics from her success to characters she played in the films, the Saina actress was asked whether or not she’s ever been carried away while shooting a romantic scene. She replied to it by saying, “No, not at all, because actually contrary to what audience believe, romantic scenes are most clinical to do, and especially when there is a physicality involved. If there is a kissing scene or lovemaking scene and I have done both in my films. It’s actually very technical and clinical. So, you can’t just be there for the emotions. You have to be there and act the emotions. At least, in my case, that has happened.”

Further to this, Parineeti shared how in such scenes, director’s call for cut is supreme. She said, “But in such scenes, ‘cut’ means ‘cut’.” And perhaps, that is for the best, considering it is most important to maintain professionalism on the sets.

Speaking on the work front, Parineeti shared, “I was waiting for all the love and accolades that I got at the beginning of my career to come back. Finally, it has happened. I am humbled and overwhelmed. The critics weren’t wrong when they did not like what they saw about me; it was just that I had to make the right choices that would showcase my talent. 2021 has given me my results, I would say.” Looking at her recent projects, guess we’d have to agree with the actress on this one!

Also Read : Parineeti Chopra Has A Befitting Reply For Trolls Who Have Constantly Questioned Her Movies